Singer says new presidential palace not as 'sumptuous' as claimed 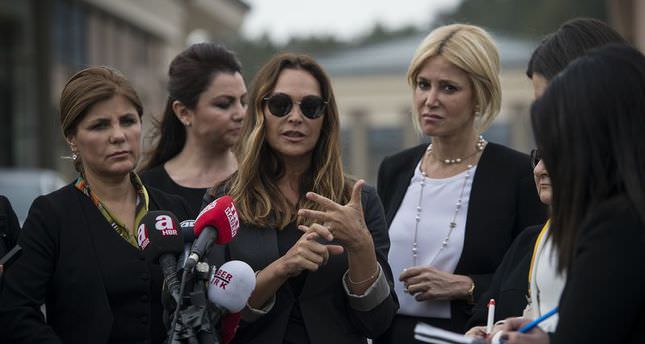 by Daily Sabah Dec 05, 2014 12:00 am
Renowned Turkish actress and singer Hülya Avşar downplayed criticism of the new presidential palace and said the complex was not as "sumptuous as it made out to be," adding that the debate on the palace was an "exaggeration."

Avşar said she came to realize how unnecessary the recent polemic on the palace was once she stepped into the palace when visiting with members of a women's nongovernmental organization on Thursday. "I toured the place and now I think it is how a presidential palace should be. [Russian President Vladimir] Putin and the Pope visited the palace and I think it is a pleasant place to host such [dignitaries]," she told reporters.

Hülya Avşar met President Recep Tayyip Erdoğan during her visit. Asked about whether she discussed the palace with Erdoğan, she said, "I would tell him that my house is more sumptuous but it would be naturally inappropriate," she added.

The palace, opened in October, was criticized by the opposition for its cost and size. The presidency dismissed the criticism, stating that the palace was not built exclusively for President Erdoğan and was planned as a long-standing structure that will accommodate the needs of the presidency. Erdoğan himself said the palace was built for the nation. "This is an artifact that Turkey will hand down to future generations," Erdoğan said on December 3.