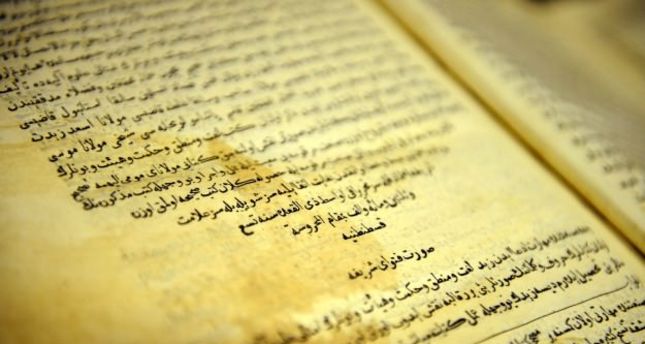 by Daily Sabah Dec 06, 2014 12:00 am
A proposal for the introduction of mandatory Ottoman language lessons in high schools was approved by authorities at the 19th National Education Council.

Ottoman, which was replaced with the modern Turkish language in 1928, divided council members, which include Ministry of National Education officials, educators, union members and other groups linked to education. Those in favor of Ottoman as a compulsory subject defended the idea as a necessary move to have a better understanding of the region's 600-year history as the birthplace and center of the Ottoman Empire.

The language, now largely forgotten, proved divisive for opposition parties. The Nationalist Movement Party (MHP) and the Republican People's Party (CHP) were at odds over the language lessons though they often agree in strict opposition to government policies. Özcan Yeniçeri, a prominent lawmaker from the MHP lauded the move. "Turkish youth should absolutely learn this language to understand what their forefathers went through, to benefit from their experience," he said. Yeniçeri complained that intellectuals could not read Ottoman history from its original sources. "This is a move that will enable people to understand their history," he said. Despite a mostly positive reaction to the issue by the public, Akif Hamzaçebi, acting chairman for the CHP's party group in Parliament, claimed the teaching the Ottoman language would be "good only for reading old epitaphs." Hamzaçebi said the government should work for the translation of works in Ottoman Turkish into modern Turkish instead of teaching students Ottoman Turkish.