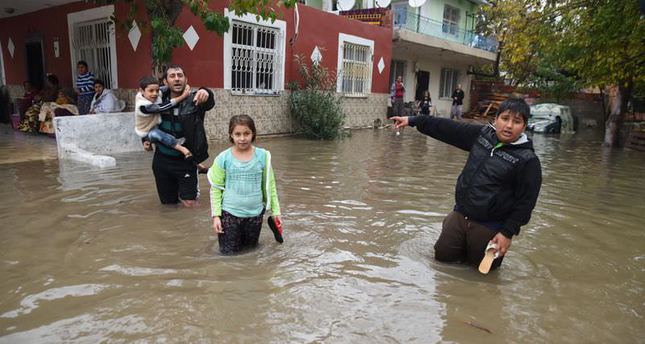 by Daily Sabah Dec 09, 2014 12:00 am
Downpours on Monday and Tuesday inundated Antalya and İzmir, two cities in southwestern Turkey that usually see low precipitation in autumn.

Incessant rainfall which continued from late Monday into the early hours of Tuesday, paralyzed daily life in Antalya, a popular resort among foreign and local tourists. A large number of houses and shops in the city were flooded, while floodwaters inundated the main streets, stranding hundreds of motorists in their vehicles. A police station was among the flooded premises.

Antalya fire department officials said they reported over 900 cases of people stranded in their cars and flooded houses. Meteorological experts said that the rainfall, which continued for 12 hours before finally abating around noon on Tuesday, hit central Antalya the hardest.

Syrians living in makeshift tents were among the worst affected by the rainfall. Eighty-five Syrians, including 25 children who took shelter in Antalya after fleeing the conflict in their country, were rendered homeless by floods washing away their tents. Disaster and Emergency Management Authority (AFAD) and local officials rushed to help the Syrians who were working in Antalya's greenhouses. AFAD officials said that Syrians were evacuated from the flooded areas and will be provided with new tents as temporary accommodation before their relocation to "better facilities." Antalya municipality officials also delivered food aid to desperate Syrians.

In the western city of İzmir, an afternoon rainfall on Monday caused severe flooding. Streets were inundated with heavy rain while locals complained that the lack of maintenance on the street's drainage often led to floods. A driver stranded in his vehicle was rescued by locals in İzmir's Gültepe. Public transport came to a halt in the city due to heavy floods.