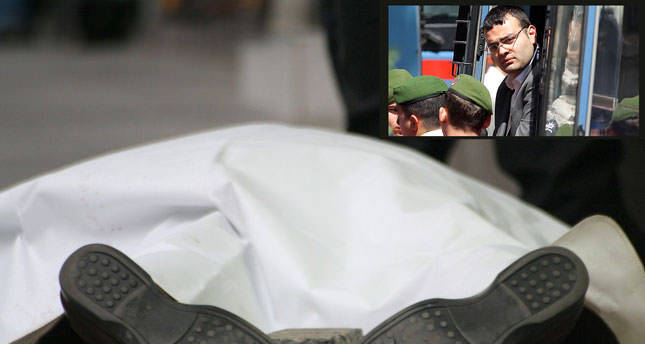 by Daily Sabah Dec 09, 2014 12:00 am
In his new testimony to police, Ogün Samast, convicted of the murder of Turkish-Armenian journalist Hrant Dink, said his plot to assassinate Dink was known by two senior police officials and claimed both men "backed" the plot.

Samast was captured two days after the murder in January 2007 in Istanbul, a short time before the arrest of Yasin Hayal and Erhan Tuncel, who were accused of masterminding the murder. He was sentenced to 22 years in prison. Samast applied to the prosecutor's office in November, requesting to give new testimony regarding the murder. Although he pleaded guilty to the murder, Samast had not revealed the details of the murder before, except testifying that Hayal gave him the weapon he used in the assassination.

In testimony on Dec. 5, which was revealed on Tuesday, Samast said Ali Fuat Yılmazer, deputy director of Istanbul's police intelligence department, and Ramazan Akyürek, Turkish National Police's intelligence department director at the time of the murder, knew about the plot to murder Dink and backed him and Hayal. Samast claimed Hayal, a former convict involved in the bombing of a McDonald's restaurant, motivated him to carry out the murder and supplied him with the pistol he used in the murder. He said that he was influenced by Hayal's nationalist views. "One day, he told me that Hrant Dink should be killed and asked me if I could do it. I accepted," he told the prosecutor. Samast said he once overheard Hayal and his friend Erhan Tuncel speaking about Akyürek and Yılmazer. "I knew Akyürek, as he served as police chief of Trabzon [hometown of Ogün Samast], but I did not know who Yılmazer was. I asked Hayal what they were talking about. He told me that Tuncel knew both men personally. He also told me, 'Akyürek knows our plans, even the Istanbul police chief (Celalettin Cerrah) knows about it, and they support us,' " Samast said. He stated that Hayal threatened him. "He said that he would 'hurt' me if I backed out of the plan," he said.

Both Yılmazer and Akyürek are accused of having ties to the controversial Gülen Movement. Some Turkish media outlets have claimed that Akyürek was one of the "police imams" of the Gülen Movement, an infiltrator in the police carrying out the orders of the movement led by Fethullah Gülen. The movement is accused of running "a parallel state" in Turkey and attempting to overthrow the government through its infiltrators in law enforcement and the judiciary.

Samast said Hayal gave him a pistol and a small amount of money before his trip to Istanbul from his hometown Trabzon. "He also gave me a flag and told me that they would detain me in Samsun [a province near Trabzon] on my return to Trabzon after the murder. He told me, 'Otherwise, they [investigators] may link Akyürek to us,' " Samast said. Samast claimed both Hayal and Tuncel had close connections to the police in Trabzon, and Hayal arranged how he would be detained. "Yasin Hayal told me not to abandon the weapon I used in the murder. He also told me that I would get away with a light sentence because police would protect us," he said. He further stated that Hayal was involved in the beating of a priest in Trabzon but got away with it. "Because police were protecting him," Samast claimed. He said that he decided to give a new testimony after he found out that a new and more comprehensive investigation had been launched into the murder. "I thought Akyürek and Yılmazer had no influence within the police anymore and decided to speak out," he said in his testimony. Samast also stated he was afraid of "getting killed in prison" if he spoke out before.

Ogün Samast said his and Hayal's phone numbers were investigated by police only one hour after the murder. "I wasn't captured at that time, but someone with the police inquired about Hayal's phone number. I want authorities to investigate who this person is and how he or she knew that both me and Hayal had a connection to the murder," he said. Samast called upon authorities to investigate Akyürek, Yılmazer and other police officers.
An investigation by previous prosecutors who worked on the murder case revealed that they dismissed allegations about Akyürek and Yılmazer.

Yılmazer is currently in prison for a separate case involving illegal wiretapping, while Akyürek was removed from duty amid a major reshuffle in Turkish law enforcement last year. Earlier, he was suspended over allegations of destroying and leaking secret documents regarding the Dink investigation. Testifying to prosecutors recently, Akyürek admitted that he was aware of a planned murder regarding Dink after one of his subordinates presented him an intelligence report.