Golden horn bridge closed to traffic after vehicles have a blowout 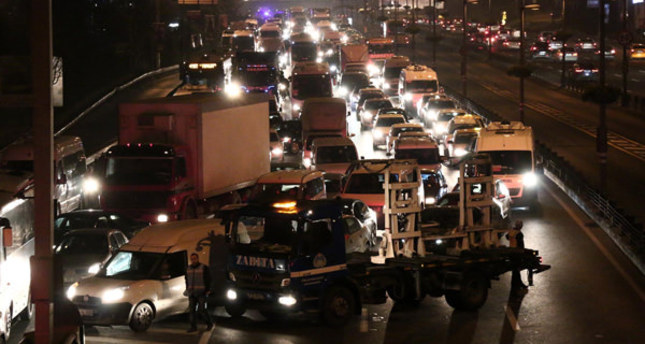 by Daily Sabah Dec 10, 2014 12:00 am
Scalpels falling from a vehicle traveling along Golden Horn bridge in Istanbul have cut the tires of many vehicles travelling in the same direction, causing congestion on the bridge.

Many vehicles got stranded on Istanbul's Golden Horn as a box full of scalpels fell off the vehicle traveling in the direction of Mecidiyeköy, bursting its tires. The scalpels that scattered across the road cut the tires of approximately 40 vehicles, leading to the closure of the bridge to traffic.

Police teams were dispatched to the scene after being notified about the incident.

Those vehicles with only one flat tire could continue their journey with a spare tire while the others with more flat tires had to wait for the teams from road assistance and the police to arrive.

An officer from the road assistance team voiced his astonishment about the incident saying this was the first time he had encountered such an incident in 35 years of service.

The bridge was opened to traffic two hours after the incident.