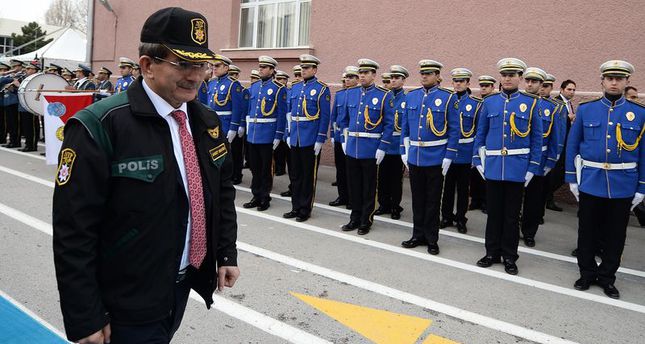 by Daily Sabah Dec 11, 2014 12:00 am
Prime Minister Ahmet Davutoğlu inaugurated "narcoteams" on Thursday, special police units that will be deployed in the vicinity of schools to prevent drug abuse amid the country's youth.

Narcoteams, first announced in November's council against drugs that brought together government officials and experts in anti-drug efforts, were introduced at a ceremony yesterday. Davutoğlu said at the ceremony that drugs posed a grave danger to the youth of today and a equated the threat to terrorism, saying the narcoteams would have "a sacred duty." He called on the police officers assigned to the teams to approach the youth "not as potential criminals but like your own sons and daughters."

"Your compassion, your good attitude toward those young people are the best measures for preventing them from committing crimes," he said.

The teams, which will be composed of counter-narcotics police officers, psychology and sociology experts, will be responsible for the prevention of drug sales in high-risk areas, such as schools, and providing psychological and social support to the young drug users. As a pilot project, 1,000 personnel will be deployed in 11 cities including Istanbul, Ankara, İzmir, Bursa, Adana, Mersin, Antalya, Konya, Diyarbakır, Samsun and Erzurum. By the end of 2015, 3,250 personnel are expected to be deployed across the country. Narcoteams will be in close coordination with local authorities, academics, nongovernmental organizations and opinion leaders to actively monitor the situation of the troubled youth and reach out to them.

Narcoteams is part of a broader plan by the Turkish government to resolve the drug problem in Turkey. Although drug use remains at 2.7 percent amid the general population, according to official figures, the government vowed to minimize this figure by implementing measures in a Rapid Action Plan. The plan, coordinated by various ministries, was discussed in last month's First Council Against Drugs.

Measures against drug abuse include a more effective law enforcement, harsher sentences for drug dealing and other related crimes and a campaign to raise awareness in families among other steps. Davutoğlu has emphasized earlier that they will be adopting a "remedial" approach rather than a "threatening" one by reaching out to the youth affected by drugs through social activities and rehabilitation. Prevention is another key component of the plan and efforts will also concentrate on teaching families how to prevent their children from addiction to drugs.