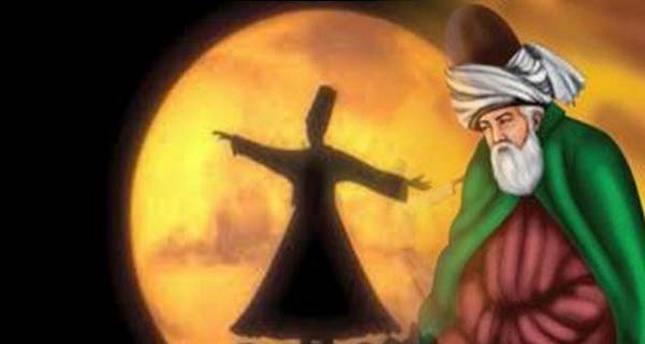 by Daily Sabah Dec 13, 2014 12:00 am
Descendants of the 13th century Sufi mystic Mevlana Celaleddin Rumi and representatives of his Mevlevi order announced the establishment of a foundation to fight the commercialization and exploitation of the order.

Rumi's 22nd generation grandson, Faruk Hemdem Çeleb,i and M. Fatih Çıtlak, one of the senior leaders of the order, held a press conference on their efforts in Istanbul on Friday.

"Unfortunately, the concept of the Mevlevi order was desecrated. There have been people looking to gain financial benefits from the Mevlevi order and those who exploited the mystic's views and attempted to blend them with their own views for personal gains. Today, we announce that the Mevlevi order is not a dead civilization," Çıtlak said.

M. Fatih Çıtlak said: "We are talking about the spoiling of an order that was one of the pillars of the Seljuk and Ottoman civilizations. There are people who claim to be Mevlevi but not Muslims. No one has the right to spoil the Mevlevi order under the guise of being its faithful members. They do not know what Mevlevi beliefs are really about. Unfortunately, the Mevlevi order faces a paradox of being universally known though people really miss the true meaning of it."

"We will promote all the rules and conventions of the Mevlevi order through a foundation," he added.

Detailing their efforts, Faruk Hemdem Çelebi said: "The International Mevlana Foundation applied to the Turkish Patents Institute and secured the rights to the usage of some names important to the Mevlevi order. Despite our foundation's efforts and despite designation by UNESCO with a preservation status, 'sema' [the whirling ritual of the order] is being performed irresponsibly everywhere. It worries us as [Rumi's] family to see 'sema' being performed in restaurants and coffeehouses in Sultanahmet [Istanbul's popular touristic district], in other tourist destinations and hotels and at the openings of businesses and weddings. New groups and fake clerics with no links to the Mevlevi order have emerged."

He said that they engaged in talks with authorities for the implementation of a law to preserve Rumi's legacy and convey the Mevlevi order's views to future generations in an accurate way.

Rumi's teachings preaching love and peace are universally embraced and the mystic has been influential from his time up to the present. The Mevlevi order is most famously associated with the ritual of whirling dervishes known as 'sema,' which represents one's spiritual ascent. It has been heavily commercialized as a tourist attraction lately as Çıtlak and other members of the order complain. Groups of whirling dervishes not associated with the order charge high fees for performing at weddings and other events.