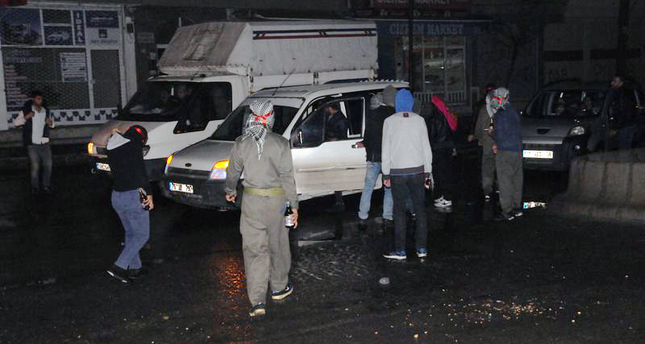 by daily sabah
Dec 15, 2014 12:00 am
Members of the terrorist organization PKK's youth wing instigated a wave of riots in Cizre, a town in the southeastern Turkish province of Şırnak, on Sunday night. An armed crowd hurled Molotov cocktails at the local offices of the ruling Justice and Development Party (AK Party), a police station and a school in the town. Rioters, including children, clashed with riot police intervening in the crowd.

The attacks came hours after the Patriotic Revolutionary Youth Movement (YDG-H) of the PKK had set up a "checkpoint" in the town, stopping and searching cars. Wielding AK-47 rifles, the crowd also smashed lampposts on the streets. The group then hijacked cars they had stopped at the checkpoint and set up barricades against police intervention. Rioters also damaged the local branch of a state-run bank.

The police fired teargas and water cannons on rioters who tossed Molotov cocktails, fired fireworks and noise bombs at the police squads. After a prolonged clash, the rioters were dispersed. No casualties were reported in the clashes, although a 12-year-old boy, reportedly among the crowd of rioters, was slightly injured. The PKK is known for employing children to conduct their urban riots.

Earlier on Sunday, a group of PKK supporters had staged riots and clashed with police in Nusaybin, a town in the southeastern Turkish province of Mardin.