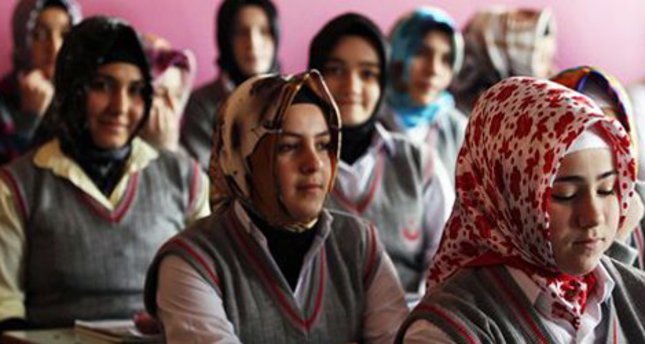 by Safure Cantürk Dec 15, 2014 12:00 am
The imam-hatip - literally imam and preacher - schools of Turkey, which focus on a curriculum with theological lessons, will be opened abroad for Turkish expatriates in other countries.

The Ministry of National Education plans to establish schools in countries with a large Turkish population and has started talks with Turkish communities to determine their religious educational needs. The ministry also plans to convert buildings owned by the state in France's Strasbourg, Austria's Vienna and New Jersey in the United States to imam-hatip schools and will cooperate with the Diyanet Foundation of Turkey's Presidency of Religious Affairs (DİB), top state-run authority on religious affairs.

Along with the opening of imam-hatip schools abroad, the ministry plans to increase the number of international imam-hatip schools operating in Turkey. Currently, three schools operate in the cities of Istanbul, Kayseri and Konya where nearly 1,000 students from 72 countries attend. Those international schools were established to train religious officials such as imams for Muslim countries lacking resources. The ministry also provides training for staff of religious schools in Russia, Bulgaria, Greece, Romania and Somalia and delivers educational materials to those countries.

The imam-hatip schools, which offer a mixed curriculum of Islamic theology and non-religious subjects, have long been targeted by the country's secular elite, which have been at odds with conservatives. Especially during the February 28 coup process in late 1990s, imam-hatip students were forced to drop out of schools after imam-hatip middle schools were closed and denied admission to universities by a deliberate decrease in high school grades.

The incumbent Justice and Development Party (AK Party) came to power by garnering the votes of masses fed up with decades of oppression for their beliefs, even though demand for imam-hatip schools had declined after the 1997 coup. The number of imam-hatip high schools rose to 1,008 from 876 last year. Total number of imam-hatip students currently stands over 714,000.