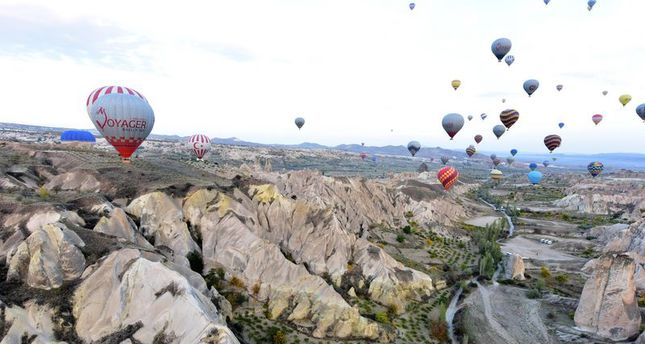 by Anadolu Agency Dec 17, 2014 12:00 am
A Chinese national was killed and 11 others were injured when two hot air balloon crash-landed in the central Turkish province of Nevşehir yesterday.

The victim was identified as Chinese national Tang Yi. Nevşehir Governor Mehmet Ceylan said that along with the deceased woman, there were eight tourists from Malaysia and China, three Turkish citizens, including the pilot, were on board the balloons. He said an investigation looking into the accident was underway but initial findings showed that the balloons crash-landed during a period of strong winds in the Karadağ district at around 08:15 a.m. after completing a trip lasting about two hours. The injured were hospitalized due to fractures but they were in good condition, according to the health authorities. Turkish news agencies said the balloon in which the Chinese victim was traveling drifted some 150 meters off course before making a sharp landing. Two of the injured people remain in a critical condition.

Officials from the state-run General Directorate of Civil Aviation, which oversees and inspects hot air balloon operations in the region, said two hot air balloons operated by a private company crash-landed when a sudden gust of wind forced the balloons to land. The directorate and security forces launched an investigation into the accident.

The area where the balloon crashed is located in the historical Cappadocia region, famous for its volcanic formations dubbed "fairy chimneys." Hot air balloons are among the most popular touristic activities in the region though occasional accidents sometimes occur. One-hundred-and-ninety balloons operate in the region according to statistics and they are subject to regular inspections by General Directorate of Civil Aviation. In May 2013, three Brazilian tourists were killed when two balloons collided mid-air. In 2009, a British tourist was killed in a crash.