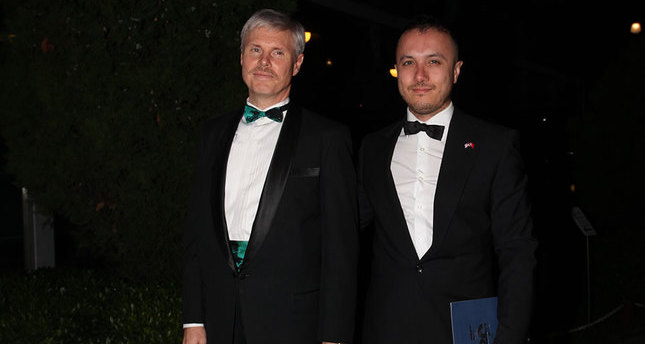 by Daily Sabah Dec 17, 2014 12:00 am
Charles F. Hunter, U.S. Consul General in Istanbul, confirmed that he would marry his Turkish boyfriend after the diplomat made the headlines last week for the reported marriage.

Hunter was at an event at the Dutch consulate the previous day where he sang at an a capella choir. He responded to reporters' questions afterward. Naturally, almost all questions were about his affair with Turkish artist Ramadan Çaysever, and Hunter spoke about the affair for the first time. He said he "confirmed" all the reports in the press about his affair and planned marriage, but avoided elaborating on the matter. Çaysever, who frequently accompanies the Consul General at events, was absent at Tuesday night's event.

Meanwhile, rumors made the rounds in the media about the top diplomat's affair. Some media outlets claimed Çaysever converted to Christianity for his partner. Milliyet, a Turkish daily, claimed Hunter asked for assignment of a bodyguard for Çaysever who has moved in with him, but has not been assigned one yet.

Daily Sabah first broke the story, reporting that Hunter and his Turkish boyfriend first met during an event where Çaysever, a synth-pop musician with two albums, performed in Istanbul. According to the daily, Hunter proposed to him a few months ago and announced his marriage plans to his close friends over a Thanksgiving dinner. The diplomat and his domestic partner will be married in Hunter's hometown, Appleton, Wisconsin. Wisconsin is among the states that recently legalized same-sex marriages. The report in Turkish newspaper Sabah claimed the couple will travel to the United States on Dec. 20, although a date for the marriage ceremony has not yet been set. Turkey does not recognize same-sex marriages, but the couple plans to host a wedding banquet for their friends in Turkey after spending their Christmas vacation in the United States.