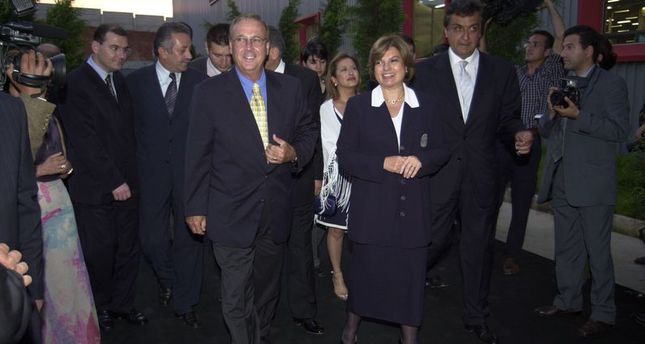 by Daily Sabah Dec 20, 2014 12:00 am
Tansu Çiller, who served as deputy prime minister in a coalition government that collapsed after a military intervention in 1997, attended the hearing on the coup for the first time on Friday and acknowledged that the process leading to the collapse was officially "a coup."

Çiller, who was Turkey's first female prime minister, did not attend three previous hearings of the case citing health reasons and a trip abroad. She was summoned again to testify as a "victim" of the coup and finally attended the hearing at an Istanbul courthouse. Çetin Doğan, former First Army commander and one of the defendants in the case, also attended the hearing.

"February 28 was a coup, though not in a conventional sense. It should be acknowledged as a coup because Parliament, elected by national will, was forcibly handed to a minority," Çiller told the court, referring to the army's actions. She said the coup was not an isolated incident, but rather the "culmination of a process."

A total of 103 defendants, including former top generals, were released in the trial of the February 28, 1997 coup, which was branded the "postmodern coup" because it did not involve imprisonment or execution of politicians, as was the case in previous coups. Defendants are being tried although their increasing nonattendance in hearings has prolonged the legal process.

Çiller, 68, was elected in 1993. As the head of the now defunct True Path Party (DYP), she formed a coalition government with Necmettin Erbakan's Welfare Party (RP) in 1996. Under Erbakan's tenure as prime minister, the Turkish Armed Forces and the country's secular elite launched a campaign against the RP's alleged Islamist tendencies they perceived as a "threat to secularism." A massive witch-hunt against conservative members of society culminated in a call by the National Security Council, an all-too-powerful supreme body whose majority was comprised of military generals and was regarded as the stronghold of military tutelage of the state in Turkey. The council called on the government to comply with laws ensuring the secular character of the state. This was followed by a lawsuit against the RP in which Chief Prosecutor Vural Savaş demanded the closure of the party. In the face of these developments, Erbakan resigned his post on June 18, 1997.

Çiller's political career saw a decline after the coup and she withdrew from political life after the DYP's defeat in the 2002 elections.

The investigation into the coup started in 2012 after a parliamentary subcommittee was formed to look into the coup. A wave of arrests followed the launch of the probe. Çiller was summoned by a prosecutor overseeing the case in 2012 both as a "witness" and a "victim." She told the prosecutor that she was aware of a coup attempt and advised Erbakan to dismiss army commanders. "He refused on the grounds that President Süleyman Demirel would not ratify the dismissal," Çiller said in her 2012 testimony. She had claimed that she was the victim of a defamation campaign after she discovered the covert activities of a group in the army known as the Western Work Group, which is accused of laying the groundwork for the coup. Çiller, on the other hand, did not file any complaint against the defendants.