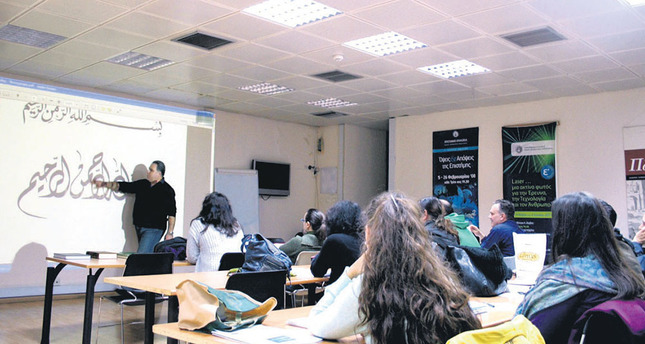 Ninety Greeks have already applied to the Ottoman classes given at the Scientific Research Institute in Athens. Among the 65 accepted applications, there are doctors, architects, an archaeologist, a painter, a student and tourist guide, a historian, several public servants and even a gymnast. Each one of them has a different reason for taking the challenge.

The three-year Ottoman course will produce its first graduates next year.

Lupis is actually a Greek from Gümülcine, or Komotini in Greek, close to the Turkish border. He learned Turkish while growing up playing in the streets with Turkish children. He later attended courses to develop his proficiency. He then became interested in Ottoman Turkish, which used many borrowed words from Arabic and Persian and was written in the Arabic alphabet, spoken in the past. He attended Ottoman history and language classes at Bilkent University between 2004 and 2007. He later went to Harvard University to study Middle East history during the Ottoman era.

His passion for the language and history of the Ottomans became infectious. Two years ago, he applied to the Scientific Research Institute to give Ottoman classes. He describes Ottoman as "nice but hard." He said Greeks aspiring to become proficient in Ottoman have various priorities.

He said his main objective was not to teach people how to speak the language. The aim is to read old documents and inscriptions, he said.

He said the Ottoman language, formed by the amalgamation of Turkish, Arabic and Persian, is a "dead language." The main cause is that it's no longer being used. Almost no one in the former Ottoman land speaks it.

Students said that their principle objective was to learn how to read inscriptions, but some also noted that they admired the artistic skill inherent in some examples. Some said they saw reading Ottoman as a challenge, similar to solving crossword puzzles. Artists attending the class wanted to imitate Hat – Ottoman calligraphy. The architect and the historian said they were interested for professional reasons, mainly to study Ottoman buildings and documents in the country.