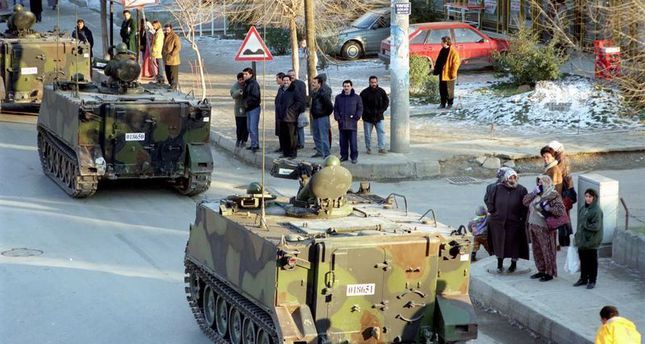 The next hearing in the trial of 103 defendants accused of masterminding and executing the so-called post-modern coup due to its bloodless nature, will be held in the capital Ankara on February 16. The court ordered all plaintiffs to be present at the hearing with formal documents regarding their accusations.

Defendants, all released pending trial, face charges of attempting to overthrow the government, which carries a life sentence. Plaintiffs from all around Turkey who claim that they were fired from their jobs, faced harassment and lawsuits, applied to Ankara's 5th Heavy Criminal Court after the trial started in 2012.

Among the plaintiffs is Sümeyye Erdoğan, President Recep Tayyip Erdoğan's youngest daughter. Erdoğan claims in her complaint that she was forced to study abroad after not being allowed to wear a headscarf at schools in Turkey during the coup process.

Wearing headscarves was banned for civil servants and students in Turkey in the 1980s under the pretext that it went against the secular nature of the state. The ban also applied to state-run spaces such as schools, courtrooms and universities, preventing women in headscarves from entering. Previously not strictly implemented, prohibitions against the ban were strictly enforced starting in 1997.

The court also summoned witnesses to the hearing including non-military civil servants who worked under the Western Working Group, a group within the military accused of laying the groundwork for the coup by blacklisting conservative members of society.
Last Update: Dec 22, 2014 5:22 pm
RELATED TOPICS