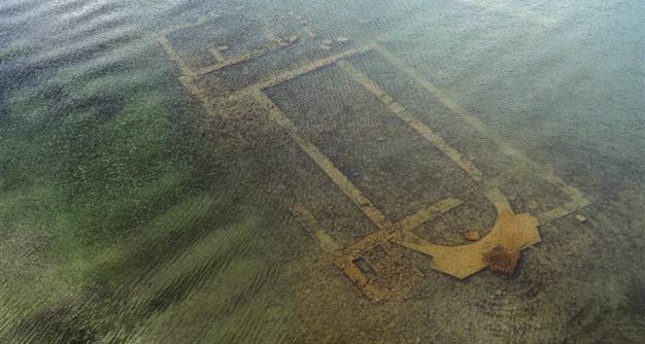 by Daily Sabah Dec 25, 2014 12:00 am
Discovered 20 meters off the shore of Lake İznik, a 1,600-year-old basilica has been listed among the top 10 discoveries of 2014 by the Archaeological Institute of America. The basilica was discovered last January during an aerial photo shoot by the Bursa Metropolitan Municipality in İznik, which has been home to many civilizations since the fourth century B.C., including the Bithynia, Romans, Seljuks and Ottomans. After the necessary studies, the head of Uludağ University's Department of Archaeology, Professor Mustafa Şahin, said that the building was identified as a church that was built in the name of Saint Neophytos, who was killed by Roman soldiers near Lake İznik. He added that Saint Neophytos was first buried in the basilica, but then his body was moved to the nearby Church of the Koimesis. Şahin also said that the information found in ancient texts was verified, as the underwater research team discovered that the door of the burial chamber had been opened. The Edict of Milan freed Christianity in 313 A.D. within the borders of the Roman Empire, but according to historical sources, a Roman soldier near the coast of Lake İznik killed Saint Neophytos, who was merely a child, when practicing Christianity was banned. When the edict entered into force, those who loved Neophytos built a church in his name where he was murdered. Although the body of Saint Neophytos remained buried in the basilica for centuries, it was moved to another church after a huge earthquake in 740 A.D. The complete list of the top 10 archaeological discoveries of 2014 released by Archaeological Institute of America includes:

1. 17 temples discovered under Stonehenge in the U.K.

2. The largest hoard of Roman coins, which was found in Devon, England.

3. The biggest Greek tomb, which was discovered in Amphipolis.

4. The recent excavations in Nepal's Lubini, the birthplace of Buddha, which revealed new insights into the earliest years of Buddhism.

5. The genome sequence of Neanderthals discovered by scientists in Jerusalem.

6. One of the two lost ships of English explorer Sir John Franklin's expedition, which took place in 1846, was found in the Canadian Arctic.

7. The sunken basilica in İznik.

8. Funeral wrappings, which had been stored at the Bolton Museum in the U.K. since the 1930s, revealing that the Egyptians had mummified the dead as early as 4300 B.C.

9. A castle belonging to the Vikings was discovered in Koge, Denmark.