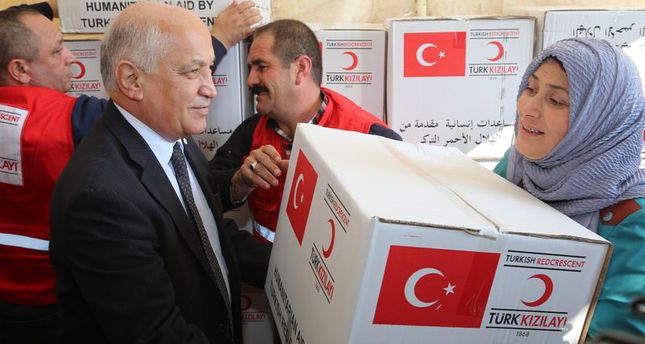 by AA Dec 30, 2014 12:00 am
The Turkish Red Crescent has distributed aid to at least 500 Turkmen families fleeing the violence of the self-proclaimed Islamic State of Iraq and al-Sham (ISIS) in Iraq's northern province Kirkuk.

The aid packages were distributed at the Turkmen Civilian Society Center and Turkmen Women Association Center in the province on Monday.

Aydin Maruf, a member of parliament representing the Iraqi Turkmen Front, and the Turkish Red Crescent Director-General Ahmet Lutfi Akar, were present during the aid delivery.

Akar said the Turkish Red Crescent had been sending humanitarian aid to Iraq since June when conflicts escalated because of the terrorist group, ISIS.

The director-general said the aid was being delivered to everybody without "discrimination on basis of race, language and religion."

"We delivered food packages to our Turkmen brothers in Kirkuk today. The city of Kirkuk means a lot to us. We consider it our duty to look after all our brothers in Iraq," Akar said.

He also said they considered Arabs, Turkmens, Kurds, Ezidis and Christians as brothers and sisters. "With our help we try to reach anyone that need it," he added.

The ISIS terrorist organization recently captured large swathes of land in Iraq and Syria, and declared what it has named a cross-border Islamic caliphate. The group has killed thousands of people and displaced millions in both countries.

Established 146 years ago, the Turkish Red Crescent is one of the oldest humanitarian agencies in the world that helps people from Turkey and the world in crises or natural disasters