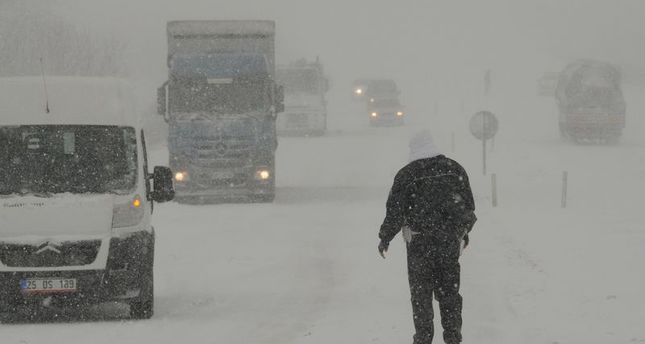 Turkey is battling bad weather which is hitting western regions in particular, where highways remained closed on Tuesday and Wednesday, leaving motorists stranded for a lengthy period.

Heavy snowfall as well as icy conditions led to the closure of a major road connecting Istanbul to the western city of İzmir, as well as roads connecting Bursa in northwestern Turkey to the capital Ankara and roads between the western cities of Afyon, Kütahya and Uşak.

The İzmir-Istanbul highway was first reopened hours after a truck accident led to closure of two lanes late on Tuesday, but a section of the road between the western province of Manisa and the northwestern province of Balıkesir was shut down again around midnight due to bad weather. Crews worked to clear the road where hundreds of vehicles were stranded, but with little effect. Large trucks which had crashed after sliding on icy slopes added to traffic woes.

The closure frustrated motorists who had hit the road from Istanbul for a four-day holiday celebrating the New Year. Occupants of stranded cars took shelter at gas stations and motels along the road, while the Disaster and Emergency Management Authority (AFAD) delivered food and aid to stranded travelers.

Due to heavy snowfall and blizzards, schools were closed yesterday in 14 cities in western, northwestern and northern Turkey.

Apart from the closure of roads, the snowfall took its toll on daily life within city limits in western Turkey. In the Simav district of the Kütahya province, a roof of an empty stadium collapsed as the snow depth reached 40 centimeters. In the Balıkesir province, roads to 326 villages were closed due to heavy snow.

The Çanakkale (Dardanelles) Strait, a main gateway to the Black Sea and the Marmara Sea was closed to traffic due to low visibility yesterday.


Snowfall also paralyzed life in Istanbul and traffic came to a halt briefly in the evening rush hour, despite continuous efforts by workers to clear the roads. Crews poured chemicals and salt on the icy roads throughout Tuesday and yesterday.

The snowfall is expected to lose its strength today in the city and temperatures are predicted to rise from 2 to 6 degrees Celsius. The depth of snow in the city was the highest in the Tuzla district on the Asian side yesterday. Other districts located on higher grounds also suffered from heavy snow.

Flights and ferry services suffered from cancellations again yesterday due to severe weather conditions. Turkish Airlines cancelled a number of domestic flights and flights to Geneva and Zagreb.

But the bad weather was not without its benefits. Istanbul municipality announced water levels in dams supplying water to the city rose to 59.58 percent with the latest precipitation, topping 45.97 percent earlier this month, which was the highest in a year. Istanbul has been facing the threat of water shortage after a dry spell earlier this year.