Forecasters warn Turkey’s cold spell is far from over 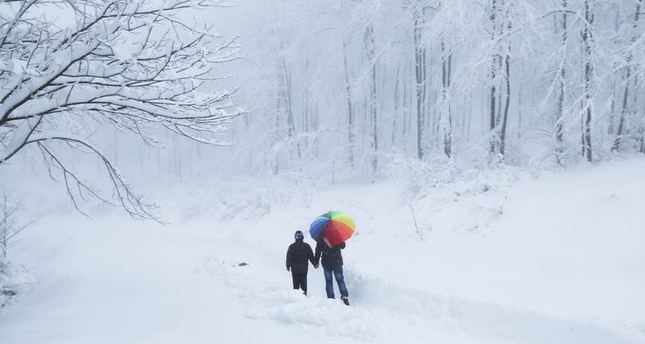 Turkey is grappling with a cold front that has been bearing down on the country since last week. Heavy snowfall and snowstorms led to road closures that have left people stranded, especially in western Turkey. Weather forecasters cautioned that Turkey will see a new cold wave starting on Monday with temperatures set to drop further.

Snowfall, sleet, snowstorms and blizzards are taking their toll on numerous cities across the west and north of the country.

In northwestern Turkey's Balıkesir, people in 240 villages were stranded as snowfall shut down the roads. In the northern Turkish province of Karabük, roads to 30 villages were closed on Friday after three days of heavy snowfall.

Storms knocked down power lines in several provinces such as Bilecik in western Turkey where a number of villages suffered from power outages throughout the week. In Balıkesir, about 300 villages were without power as of Friday due to heavy snow.

In a rural part of Biga, a district of the western Turkish province of Çanakkale, 54 people working at a wood processing workshop were stranded in their huts, but workers and their families were rescued by gendarme troops clearing the heavy snow in the area. Additionally, snowfall had closed down a major road connecting Istanbul to the western city of İzmir from December 30 to January 1, trapping hundreds of travelers in the process. Heavy precipitation also impacted animals.

In the Turgutlu district of western Turkey's Manisa province, constant rainfall caused the Gediz River to overflow and flooded a poultry farm. About 22,000 chickens were drowned in the flood that also inundated thousands of acres of fields. Other farms in the area were also affected and the local fire department delivered fodder to stranded animals. In the İnegöl district of the northwestern Turkish city of Bursa, heavy snowfall led to the collapse of a cowshed that killed 10 cows.

Temperatures will float around zero and below for western Turkey except a brief rise to 5 degrees in Istanbul on Monday. Snowfall will make a mighty comeback on Monday all across the country after a brief rainy spell over the weekend in central and western Turkey. Save the southern parts of the country, the white menace will take over the country while the rest will see heavy rainfalls.

Forecasters warn that Wednesday will be particularly grueling for daily life with temperatures sliding further down all over the country.