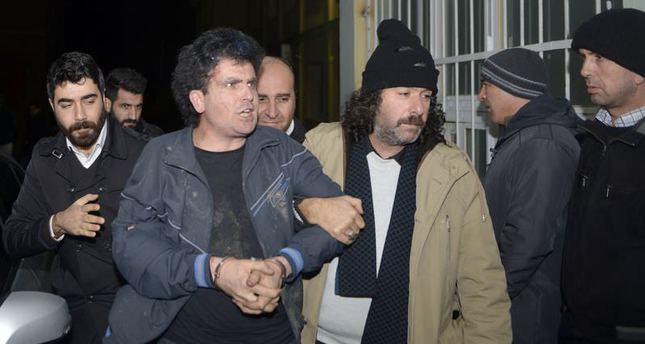 DHKP-C, the terrorist organization behind the 2013 bombing of the U.S. embassy in Ankara, claims responsibility for Thursday's attempted attack on Istanbul’s Dolmabahçe Palace

A statement released on Friday on a website affiliated with the Revolutionary People's Liberation Party-Front (DHKP-C) claimed that the terrorist organization orchestrated the foiled attack on Istanbul's Dolmabahçe Palace on Thursday.

The DHKP-C is known for its brazen attack on the U.S. embassy in the capital Ankara in 2013, which ended with the deaths of the suicide bomber and a Turkish guard as well as a string of attacks in the capital targeting government and police buildings.

The group said in the statement that Fırat Özçelik, "one of our warriors," carried out the attack. Özçelik hurled two grenades at the police honor guard posted outside the Ottoman-era palace, located near Prime Minister Ahmet Davutoğlu's office. The grenades failed to explode and the man then drew a pistol but it misfired. The honor guards jumped on the man and he was arrested. He is currently in detention.

The DHKP-C statement said the attack was in retaliation for the death of Berkin Elvan, a teenager who died in March 2014 after being hit by a police tear gas canister during the 2013 Gezi Park demonstrations in Istanbul. The DHKP-C is known as one of the main groups that incited violent riots during the incidents that originally started out as a peaceful environmentalist protest against the redevelopment of the park in central Istanbul.

Özçelik shouted slogans in favor of the terrorist organization as he was being taken to hospital for a routine medical examination for detainees. Istanbul Police Chief Selami Altınok said the suspect spent three years behind bars between 2003 and 2006 for membership in the terrorist organization. Altınok told reporters that Özçelik was armed with a pistol and "a very old" gun along with grenades.

Security forces were already on alert for attacks by the DHKP-C against the police after the National Intelligence Directorate issued a warning to Turkish National Police in October that DHKP-C militants armed with AK-47 rifles and light anti-tank weapons were plotting attacks "in critical locations" in Istanbul and the capital, Ankara.

Founded in the late 1970s, the DHKP-C is designated a terrorist organization by Turkey, the U.S. and the EU. Under the name of The Revolutionary Left (Dev Sol) until 1994, the organization claimed responsibility for a series of high-profile murders, including the assassination of two politicians in 1980.

The group also killed several Turkish intelligence officials. In 1994, it became the DHKP-C after Dev Sol splintered. The group's terror activities remained relatively minor compared to the PKK, another terrorist organization targeting Turkey, but it has attempted to make a comeback in recent years by exploiting mass protests to launch attacks against security forces.

In February 2013, a DHKP-C militant carried out a suicide bombing at the U.S. embassy compound in Ankara. A Turkish security guard at the embassy was killed while a journalist visiting the embassy was injured in the attack.

In 2013, DHKP-C militants fired rockets on the Justice and Development Party (AK Party) headquarters, Turkish National Police headquarters and a Ministry of Justice building in the capital in non-lethal attacks.