Turkey commemorates the birth of the Prophet 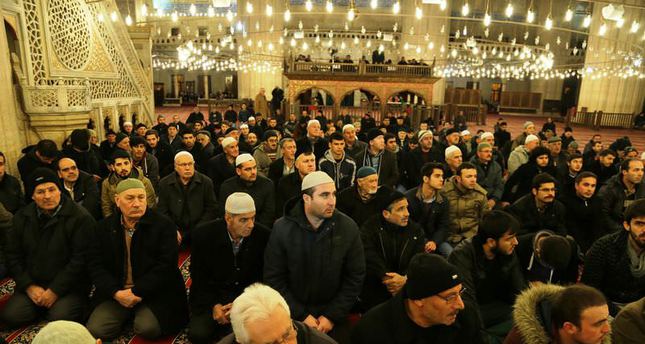 by AA Jan 03, 2015 12:00 am
Millions of Muslim across Turkey flocked to mosques to celebrate the birthday of the Prophet Muhammad, a day known for its spiritual atmosphere.

Mawlid al-Nabawi, which fell on Friday this year, attracted many Muslims to the mosques to reaffirm the ideals of Islam and recite poems dedicated to the Prophet.

Mehmet Görmez, the head of religious affairs in the country, issued a statement over the birth and arrival of the Prophet Muhammad to the world, the 1444th anniversary of his birth.

Societies that destroy civilized values and hearts that are darkened with arrogance and greed need a rebirth with our Prophet Muhammad's guidance, Görmez said in his statement.

Görmez stated that humanity learned from the Prophet how to stay on the right path of truth and treat all living creatures with mercy.

Religious programs were held at mosques located in all provinces across the country including the capital Ankara, Istanbul, İzmir as well as the western and eastern provinces.

Muslims performed prayers and read the holy Qur'an at the mosques in addition to praying and listening to hymns praising the Prophet.

In the southeastern province of Şanlıurfa, Syrians fleeing their homeland and sheltering in Turkey attended the Mawlid program held at the tent city located in the Akçakale district of the province.

The Muslim refugees recited the Qur'an and prayed during the program, which was attended by local officials from the province.