Turkey expects heavy rain and snowfall during the next few days 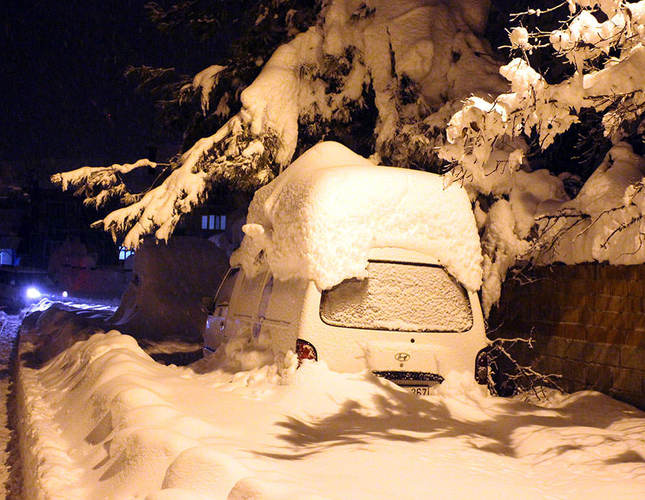 by Anadolu Agency Jan 04, 2015 12:00 am
The new cold weather front that is moving from the Balkans and the Black Sea toward Turkey will affect the entire country and be accompanied by heavy snowfall, with temperatures expected to fall drastically in the coming days.

According to a statement released by the Turkish State Meteorological Service (TSMS), heavy rain and snowfall will hit Western Turkey starting from Sunday afternoon. It will be accompanied by an eight to twelve degree drop in temperature, which would be below seasonal norms and temperatures in central and eastern Anatolia would drop further.

In certain regions, temperatures could fall as low as minus 16 degrees Celsius, said TSMS, and asked people to stay indoors, warning against freezing weather conditions and collisions.

On Saturday, officials said temperatures in the northeastern city of Kars had fallen to minus 12 degrees Celsius. The institute also reported that heavy rainfall and strong winds were expected in the south of the country.

The statement said heavy rain will hit the coast in the Marmara, Aegean and Western Black Sea regions, while snowfall mixed with rain is expected inland.

On Monday, TSMS expects rain in the Southern Aegean, Mediterranean and Central and Eastern Black Sea coast and Southeastern Anatolia, and snow in the rest of Turkey, except Thrace. Downpours will continue on Tuesday except for in Western Marmara and the Hakkari region of Turkey.

The statement warned that downpours in the Eastern Mediterranean, Central Black Sea and South Central Anatolia regions would be very strong.

Starting from Wednesday, downpours will decrease, and night frosts will be effective, especially in interior regions.

Meteorology Professor Mikdat Kadıoğlu, in a Twitter message, said Istanbul and much of Thrace would be covered in snow in the next few days.