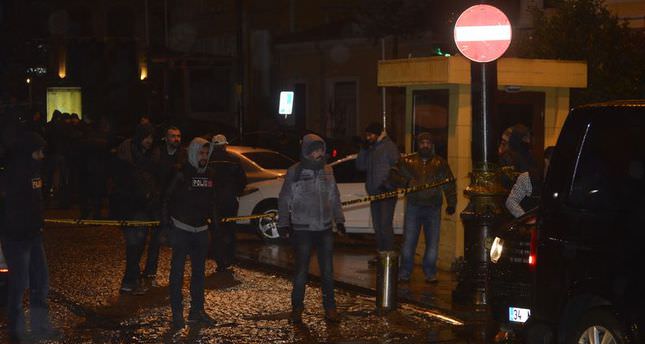 by Daily Sabah Jan 06, 2015 12:00 am
Authorities identified the suicide bomber who blew herself up in the heart of Istanbul's historic Sultanahmet district, killing one police officer injuring another on Tuesday.

A statement from the governor's office stated, Elif Sultan Kalsen, was a member of far-leftist Revolutionary People's Liberation Party-Front, or DHKP-C and had participated another bomb attack on a police station in Istanbul s Sultangazi district, in which another police officer died.

Police officer Kenan Kumaş has died at an Istanbul hospital, after suffering critical wounds in the suicide attack. Another policeman was also injured, but is not in a critical condition, according to Istanbul governor, Vasip Şahin.

The woman went into the police station in the Sultanahmet district and told the police in English she had lost her wallet before setting off her charge, and blew herself up shortly after 5 p.m. (1500 GMT), Şahin said.

Sultanahmet is a tourist hotspot in the historical peninsula where the Blue Mosque and Hagia Sophia Museum are located.

Last week a 36-year-old man was arrested after throwing a grenade and firing at a police booth in front of Dolmabahçe Palace, near the prime minister's office in Besiktaş.

The man was also a member of DHKP-C.