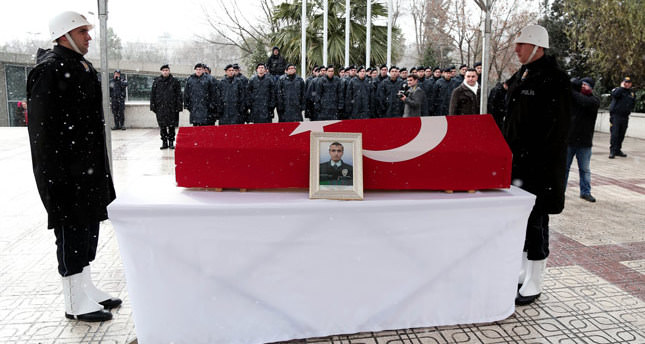 The far-left DHKP-C terrorist group, which had claimed responsibility for the 2013 attack on the U.S. Embassy in Ankara, perpetrates its second attack in a week, this time killing one police officer in the historical heart of Istanbul

The Revolutionary People's Liberation Party-Front (DHKP-C), the terrorist organization behind last week's foiled attack at Istanbul's Dolmabahçe Palace, claimed responsibility for a suicide bombing that killed a police officer and injured another in the city's Sultanahmet district on Tuesday.

It is the first suicide bombing carried out by a DHKP-C member after a 2013 bombing at the U.S. Embassy in Ankara, Turkey's capital, which killed a Turkish security guard and injured a Turkish journalist. A female suicide bomber entered the police station located near a group of Istanbul landmarks including the Sultanahmet (Blue) Mosque and Basilica Cistern on Tuesday evening.

She distracted the police officers inside by saying in English that she had lost her purse before blowing herself up. Policeman Kenan Kumaş was killed at the scene while an unidentified police officer was injured. Eyewitnesses said casualties could have been higher, as the police station is situated in a spot frequented by tourists and locals, but heavy snowfall forced many to stay indoors.

Halkın Sesi (People's Voice), a website linked to the terrorist group, released a statement saying it was behind the bombing, and Elif Sultan Kalşen, one of its members, was the suicide bomber. However, her family disputed that Kalşen carried out the attack. The family's lawyer, Ebru Timtik, said that the body that was brought to the coroner's office after the attack was not Kalşen's. The family said they lost contact with Kalşen some time ago and did not know her whereabouts. Several Turkish media outlets had reported that Turkish police named Kalşen as one of potential suicide bombers a few years ago. Kalşen and other "bombers" had filed complaints against Istanbul police after their names were revealed.

The terrorist organization said in the statement that the attack and an attack against Dolmabahçe Palace last Thursday was in retaliation to the death of Berkin Elvan, a Gezi Park rioter who died in March 2014 after he was injured during the riots in 2013. DHKP-C was among the terrorist organizations that took advantage of protests against the redevelopment of the Istanbul park to incite riots targeting security forces.

In turn, authorities stepped up security measures in Istanbul following the attack. Yesterday, a suspicious explosive device was detected on a fence of the D-100 highway near the district of Okmeydanı. The device, tied to a banner with a pro-DHKP-C slogan, turned out to be a gas cylinder. Okmeydanı is one of the working-class districts of Istanbul where the DHKP-C and other terrorist organizations exploit and recruit impoverished youth.

President Recep Tayyip Erdoğan condemned the attack in a speech yesterday. "I wonder how this woman was raised, how she came to adopt [this mindset] and what she thought she would gain by doing this," Erdoğan said, and added it was unclear whether the terrorist organization aimed to show that Sultanahmet, a popular tourist destination, is unsafe or if it sought to spread its ideology. "You are wrong if you think Turkey will accept your ideology," Erdoğan said.

The European Union issued a statement condemning the bombing. A statement from the office of Federica Mogherini, the EU High Representative for Foreign Affairs and Security Policy, said the EU would continue its regular counterterrorism dialogue meetings with Turkey "as part of our joint efforts to fight terrorism in all its forms."

The DHKP-C was founded in the 1990s after it splintered from a larger group of far-left organizations responsible for a string of attacks, and has kept a relatively low profile. Moreover, its attacks were relatively minor compared to the PKK, another terrorist organization active in Turkey; however, the DHKP-C stepped up its attacks over the past two years.

In 2013, a DHKP-C militant carried out a suicide bombing at the U.S. Embassy compound in the capital. The DHKP-C also claimed responsibility for non-lethal rocket attacks targeting Justice and Development Party (AK Party) headquarters, Turkish National Police headquarters and a Justice Ministry building in Ankara in 2013. The group, designated as a terrorist organization by Turkey, the United States and European Union, advocates a far-left ideology and it does not have a homogenous ethnic background like the PKK, which mainly draws support from Kurds. The DHKP-C's power significantly declined since the death of Dursun Karataş, one of its founding leaders, in 2008 as well. Still, experts say that the group seeks to stage a comeback by launching "sensational" attacks.

Security forces were already on alert for attacks by the DHKP-C against the police after the National Intelligence Organization (MİT) issued a warning to the Turkish National Police in October that DHKP-C militants armed with AK-47 rifles and light anti-tank weapons were plotting attacks "in critical locations" in Istanbul and Ankara.

Sultanahmet was calm yesterday after the attack. Tourists visited the Blue Mosque, Hagia Sofia and other historical sites in the district as usual, though eyewitnesses were shaken by Tuesday's incident. Sales assistant Ahmet Balta, 34, was in a carpet shop located across from the incident area when the blast occurred. He said that, at first, he thought that a roof had collapsed because of the bad weather.

"When I went out of the shop, I saw a policeman opening fire into the air. He then told us 'there is a suicide bomber there' and wanted us to move away," Balta told Anadolu Agency (AA), and described the event as "saddening."

Rıfat Dündar, 30, a peddler who had been standing near the incident site, said, "I was taking care of a customer when I heard a big noise. We've been shaken here; people were frightened."

However, many tourists around the district yesterday said they did not feel unsafe. "It is such a big city. It happens in any city in the world. I don't have any concerns about being here," 50-year-old Igor Kafkasky from Kiev told AA.

Peter Crack, 55, an accountant from Rhode Island, U.S., arrived in the city on Monday night and heard about the event in a restaurant in Sultanahmet hours after he stepped out for the evening. "We [him, his wife and his son] were walking back to the hotel. We heard a lot of sirens and did not know what was going on. When we got back to the hotel, the waiter told us there had been a bombing. It is a reality of the world that we are living today," Crack told AA, underscoring that the incident would not deter him from visiting the city again.