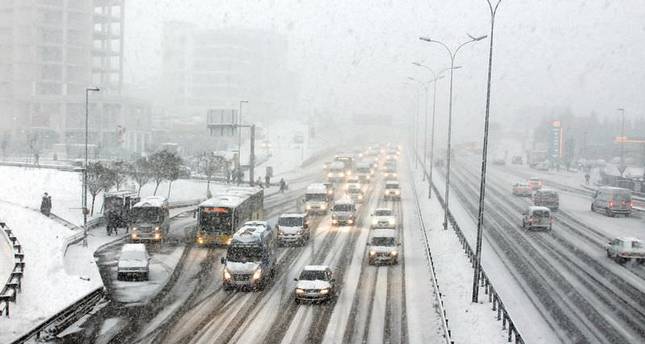 by Daily Sabah Jan 09, 2015 12:00 am
Turkey has been battling heavy snowfall, blizzards and strong winds for days and yesterday was no different as roads and schools were closed while people were stranded, and carbon monoxide poisonings claimed lives.

A weather system of unprecedented proportions, with heavy snow dominated the country throughout the week, led to the closure of nearly 6,000 village roads. Major roads connecting cities were also closed, though they were occasionally cleared of snow. A section of the TransEuropean Motorway (TEM) connecting the country's northwestern parts, including the city of Istanbul to Ankara, central Anatolia and the Black Sea region, was also closed as of yesterday in the direction of Ankara. The section is located on the Bolu Mountain and other roads located on higher ground, such as the Giresun-Sivas road connecting the Black Sea province to the central Turkish city, were also closed.

In the southern province of Mersin, 17 workers at a construction site were stranded when the snowfall and blizzard blocked a road. They were rescued 16 hours later after rescue crews cleared the snow.

The bad weather proved fatal for people residing in houses with wood and coal stoves and insufficient ventilation. Four people died across the country due to poisoning from the carbon monoxide emitted by stoves.