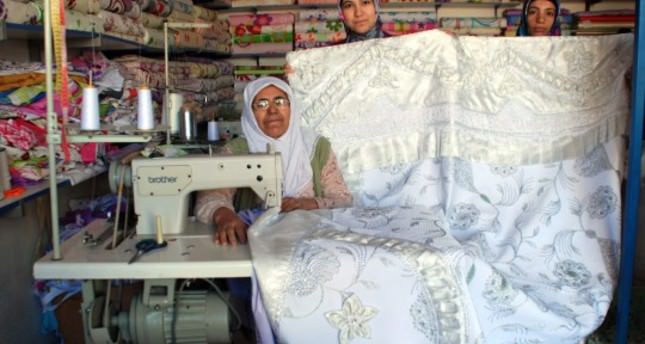 Multi-Purpose Community Centers (ÇATOM) operated by a state-run agency in southeastern Turkey, look to transform the community of impoverished, under-educated women in the region through lifelong learning programs, vocational training and socialization.

Centers have reached out to over 250,000 women since they were opened by the Directorate of Southeastern Anatolia Project (GAP) in 1995. With the support of local governorates and the Turkish Development Foundation (TKV), the centers have become widespread, and there are currently 44 ÇATOMs across the southeast including in the provinces of Adıyaman, Batman, Diyarbakır, Gaziantep, Kilis, Mardin, Siirt, Şanlıurfa and Şırnak. Through the centers, it is aimed to improve women's social and economic status.

ÇATOM offers literacy classes, home economics lessons, courses on maternal health, childcare, handicrafts and courses enabling attendees to find jobs after completing classes. Every year about 200 women who graduate from ÇATOM courses find employment and at least ten women start their own businesses, according to GAP officials. More than 10,000 people attend programs offered by the centers every year.

Apart from job opportunities, community centers offer guidance and consultation services to women about their social rights and problems they face in daily life. ÇATOM staff also help women to receive a "green card," a document required for free healthcare for low-income families, and also help with application to the civil registry as well as applying for formal marriage certificates. The region is trying to eradicate the rampant poverty where decades of a terror campaign and the accompanying crackdown left thousands without steady incomes due to lack of investment. Women are often dependent on their husbands in bureaucratic procedures such as civil registry because of being illiterate. Although the country has managed to increase the level of school attendance by girls in the region through education campaigns (it is a common practice among many families to not send daughters to school), women still suffer from a higher rate of illiteracy than men. A culture of unofficial religious marriages officiated by clerics is also prevalent in the region, and couples often live together for years without a formally-recognized marriage certificate.

In the province of Adıyaman, 275 women attend the courses at the local community center. The center offers courses on sewing, hairdressing and other professions throughout the week. Trainees make a living on the side by selling the products they learned to make. Hacer Açlan, an official at the community center, said they seek to attract disadvantaged people to the center, especially women with low socio-economic status. So far, ten women who attended the courses have started their own businesses. Açlan said that they also added a daycare to the center for women unable to leave their children at home.

Fatma Altay attends a sewing course at the community center. She was "an idle housewife" before discovering the center, but now she is looking to make a foray into the business world. "I plan to open a workshop with my friends here," she said.

Sabiha Elmacı, another woman taking courses, learned how to sew wool caps and mufflers and she sells them in the marketplace for extra income for her family.

Zeliha Işık attends an embroidery course at ÇATOM. "This place also helps us to make new friends. People open up to each other and become more close-knit," she said.