Influx of Syrians leads Turkey a major host of refugees 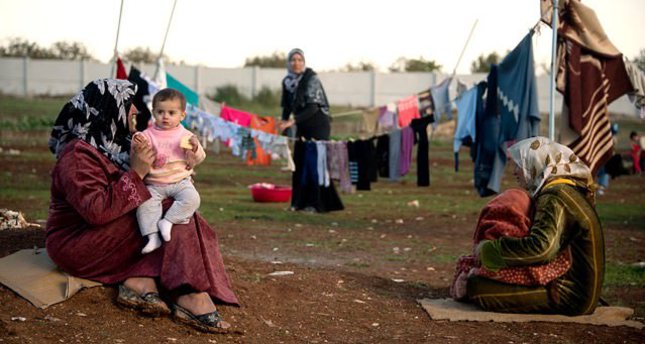 A newly released U.N. report shows that Turkey has risen to been fourth from sixth place in 2014 among countries home to the largest number of refugees in the wake of the influx of refugees from Syria in the first half of 2014

The Office of the United Nations High Commissioner for Refugees (UNHCR) released a list of countries with the highest number of refugees and Turkey holds fourth spot with 824,000 registered refugees, mostly Syrians from the country's southern neighbor.

The country currently has over 1.6 million displaced Syrian including over 220,000 staying in refugee camps built exclusively for them. It had 824,000 of them registered in the first half of 2014, according to the UNHCR report.

As a rare oasis of stability in the Middle East, beset with conflicts and terror attacks, Turkey is praised for its treatment of displaced Syrians in state-of-the-art refugee camps and its provision of continuous aid to those living outside the camps.

The UNHRC report said conflicts around the globe uprooted about 5.5 million people during the first six months of last year, pointing to a dramatic rise in the number of people forcibly displaced around the world. The report said that Syrians topped Afghans for the first time as the largest refugee population. Pakistan tops the list of countries with the largest refugee population with 1.6 million Afghan refugees. The UNHCR report compared the number of refugees to the size of a country's population or economy. In light of these comparisons, Lebanon and Jordan have the largest proportion of refugees.

Germany received the highest number of new asylum applications during the first half of 2014 with 67,400 people, according to the report. Turkey received 27,800 applications.

Turkey was second in terms of new refugee arrivals in the first six months of 2014 with 250,300 people taking shelter in the country. It followed Lebanon where 324,000 new arrivals were registered. The number of new arrivals to Turkey excluded arrivals from Kobani, Syria, which were roughly 200,000 people. The Syrian Kurdish town located opposite the southeastern Turkish town of Suruç saw a huge exodus into Turkey in September 2014 after the Islamic State of Iraq and al-Sham (ISIS) launched a brutal offensive to take over the town.

Speaking about the report, U.N. High Commissioner for Refugees Antonio Guterres said: "As long as the international community continues to fail to find political solutions to existing conflicts and to prevent new ones from starting, we will continue to have to deal with the dramatic humanitarian consequences. ... The economic, social and human cost of caring for refugees and the internally displaced is being borne mostly by poor communities, those who are least able to afford it. Enhanced international solidarity is a must if we want to avoid the risk of more and more vulnerable people being left without proper support."

Turkey, with its open-door policy for displaced Syrians seeking shelter in their country's northern neighbor, has received over 1.6 million Syrians since the unrest in their country evolved into a fully-fledged civil war in 2011. The country has spent more than $5 billion for its Syrian "guests" - the official name for refugees in Turkey with temporary protection status. The Directorate of Disaster and Emergency Management (AFAD) hosts 221,447 Syrians in 22 refugee camps and "container cities" in 10 provinces near the Turkish-Syrian border. Turkey is struggling to cope with the massive number refugees as the international community dodges its humanitarian responsibility in aiding Syrians, leaving Turkey to bear the brunt of hosting the large number of displaced people.