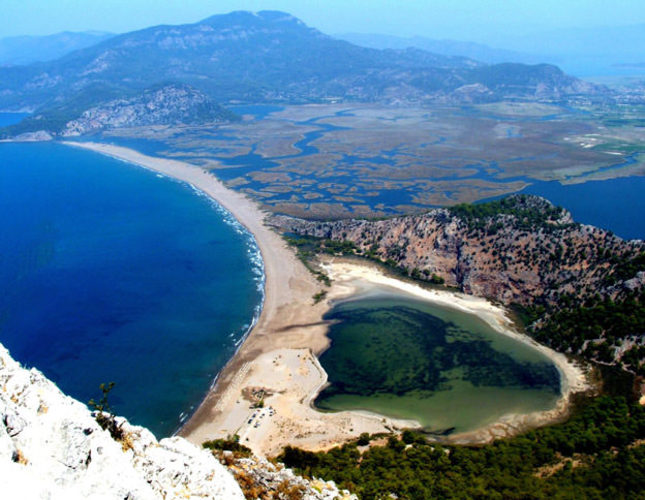 by Yusuf Ziya Durmuş Jan 09, 2015 12:00 am
Activists ended their sit-in near İztuzu beach in the southwestern Turkish province of Muğla more than a week after they started a protest against the privatization of the famed beach.

The protest ended after a court ordered the suspension of the privatization process. The Environment and Urban Development Ministry also announced that a new tender would be held for the beach.

The ministry had earlier dismissed activists' claims that construction would be allowed on the part of the beach that is a protected breeding ground for endangered Caretta caretta sea turtles, better known as loggerhead turtles, and said in a statement that the beach will not be closed to the public after the takeover by the company as activists had claimed. The statement also said that the company will not be allowed to harm the site and that the company would only set up facilities in an area outside the beach used by the public and turtles.

İztuzu, a protected beach, was privatized last summer after a tender awarded it to a Turkish company that partnered with a British company. The tender covers the operation of an already existing facility that offers services such as the hiring of lounge chairs and food and drink offerings, which has been in operation since the 1990s. Nevertheless, activists and the municipality of the Ortaca district where the beach is located, launched a legal battle to stop the privatization of the beach, which was previously operated by the municipality.

Late December, following the removal of a stay of execution order by a court, the company took construction equipment to the beach and activists tried to stop them claiming that the beach would be damaged. Turkish security forces intervened and company workers were forced out of the beach.

Environment and Urban Development Minister İdris Güllüce said the Ortaca mayor provoked the protest. According to the minister, the mayor seeks to have the beach run by the municipality once again after its ownership was transferred to the governorate. "We have a clear tender process and we will respect judiciary decisions. A new tender will be launched once the legal process is completed. If the municipality pays more, they can buy it," Güllüce told reporters

Meanwhile, activists pledged to renew their protest if the privatization is given a green light again once the suspension order is appealed at a higher court, which will issue the final verdict.