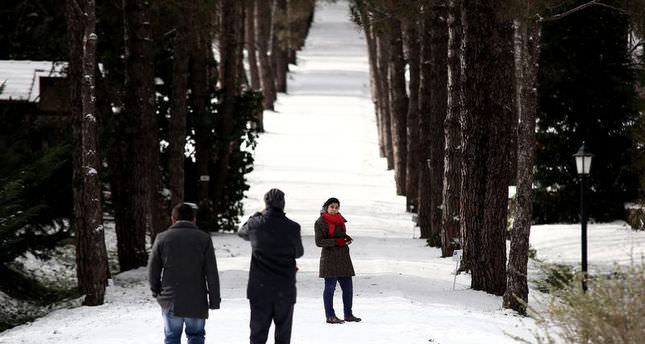 The cold spell that has gripped Turkey throughout the week will end on Monday according to meteorologists, who predict a rise in temperatures

The country has recently been embattled by snowstorms and heavy precipitation with temperatures dropping to negative 8 degrees Celsius even in usually warmer western cities.

However, the inner parts of western Turkey, including Bilecik, Eskişehir, Kütahya, as well as the capital city Ankara, will continue to be affected by perpetual snowfall with temperatures around 2 degrees Celsius on Monday. The eastern and northern regions, where harsh winter conditions are common at this time of year, will not see a change in their weather pattern, which is marked with temperatures as low as negative 7 degrees Celsius.

The southern parts of Turkey will enjoy relatively clear weather without any anticipated precipitation, although temperatures will remain as low as 4 degrees Celsius.

On Friday, snowfall started losing steam in western Turkey while it kept battering central and eastern cities. Roads to hundreds of villages were closed and workers struggled to keep the roads open with snowplows and shovels as pregnant women and severely ill locals sought to reach hospitals in towns amid heavy snow. In the eastern city of Bitlis, a 63-year-old man had to wait for eight hours for the road to be opened after he had a heart attack. The man eventually made it to the hospital and is reportedly in good health.

A section of the TransEuropean Motorway (TEM), a major route connecting northwestern Turkey to eastern and central Turkey, opened again on Friday after it had been closed due to heavy snow early Thursday.

However, the traffic snarl continued on the road as the icy ground made it difficult to drive at normal speed. During the closure, crews delivered food aid to motorists on the section of the road that connects Istanbul and its neighboring cities to Ankara. Authorities had come under fire for the failure to clear the road while officials said large trucks ignoring safety rules on the icy road often caused accidents and led to the road's closure.