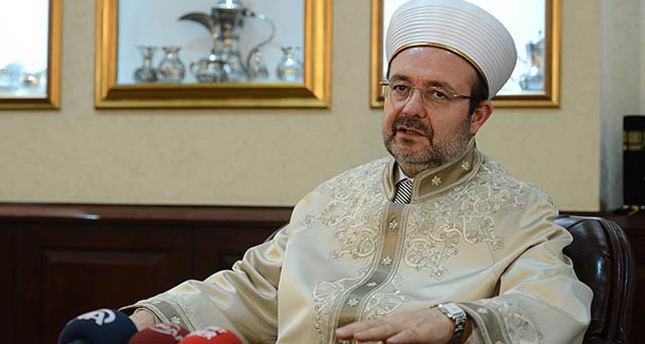 by Jan 12, 2015 12:00 am
Turkey's President of Religious Affairs has denounced the attack on a French satirical weekly as an "unacceptable" action targeting all faiths including Islam, saying he was pained to see Islamic values used as a pretext for slaughter.

Twelve people were killed Wednesday in the unprecedented attack in Paris on the Charlie Hebdo magazine, which was known for lampooning radical Islam and had angered Muslims on several occasions.

But Mehmet Görmez, the head of Turkey's Presidency of Religious Affairs – known as Diyanet in Turkish – told AFP in an interview that the massacre was an attack on all faiths, including Islam and the message of its Prophet Muhammad.

"I see this attack not only (as an attack) against a magazine's employers, France, the West or Europe but against all faiths, all esteemed values and God's messages of mercy and grace conveyed by the prophet to humanity," he said.

Video footage circulated on social media showed black hooded gunmen running through the streets of Paris, firing off a hail of bullets and shouting "Allahu Akbar" and "We have avenged the Prophet Muhammad".

But Görmez, president of top religious body of Turkey's officially secular system, expressed fury that the attackers had used sacred Islamic words like "Allahu Akbar" read out to every Muslim when they are born and repeated in each prayer time.

"The brutal massacre of people is unacceptable. It is similarly unacceptable that they are carried out in the name of religion.

"It is more painful that sacred values are disregarded, eminent concepts and values that belong to Islam are taken hostage."

While unequivocally condemning the attack "without any buts", Görmez said he deemed freedom of expression significant but said it has a limit.

"I believe that denigrating or insulting the values that make a person human – in the name of freedom of expression – is not correct."

"When it is looked at by a different faith or culture, defamation – especially on the subject of faith – could become cultural torture," he said.

In September 2012, Charlie Hebdo published cartoons of a naked Muhammad as violent protests were taking place in several countries over a low-budget film "Innocence of Muslims" that had infuriated Muslims.

Gormez said violent attacks were not linked to Islamic traditions and they were carried out by individuals with "wounded conscious and fatal identities" who were raised in the shadow of wars and the occupations of Iraq and Afghanistan.

"Neither Damascus nor Baghdad were cities in history where extremists speaking fluent Oxford English beheaded other people," he said, referring to the murders committed by Islamic State (IS) EU-born jihadists in Iraq and Syria.

The attack, suspected to have been carried out by two French brothers of Algerian origin – has raised fears of a surge in anti-Muslim feelings in Europe with public sentiment already inflamed by the atrocities committed by IS.

Reprising a theme of President Recep Tayyip Erdogan, Görmez said that Islamophobia in the West "has transformed into an industry".

But he said that those who were behind the massacre were trying to whip up an increase in Islamophobia in Europe.

"But I believe that common sense will prevail," he said, expressing hope that people of all faiths, including atheists, "will join hands and learn lessons from this scourge".

German group Pegida has in recent months rallied thousands of people in Dresden for demonstrations against what it calls the "Islamisation of the Occident."

But there has already been a strong public reaction – Germany's Cologne Cathedral turned off its lights Monday in a symbolic rejection of a rally taking place in its shadow, a gesture Gormez said had profoundly touched him.

"I penned an emotional letter to Cologne cardinal to express my gratitude," he revealed.