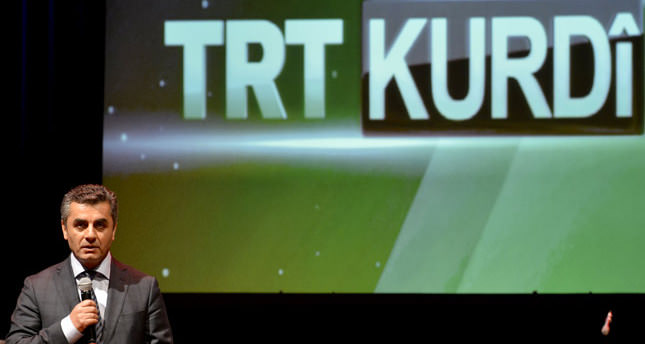 State-run broadcaster TRT, seeking to broaden its appeal to the Kurdish audience, renamed its Kurdish-language station ‘TRT Kurdi,’ marking the first time that Kurdish is used in a state agency’s name

Turkey's state-run broadcaster TRT has renamed its Kurdish-language station to "TRT Kurdi," the first time the name of a state institution included the word "Kurd."

The Turkish Radio and Television Corporation (TRT) changed the name of its Kurdish-language station to "TRT Kurdi" from TRT Şeş (TRT Six) on Saturday. TRT Director General Şenol Göka announced the change at a ceremony to mark the sixth anniversary of the TV station.

The state broadcaster, which operates 14 TV stations, marked the establishment of the station with an event in Istanbul where dengbejs (Kurdish bards) from around the world performed a concert. Şenol Göka announced the surprise name change at the event and highlighted the importance of cultural wealth.

"Ignoring diversity destroys so much. We have to accept it, enrich it and make it known by people here in Turkey and around the world," Göka said, and added that TRT Kurdi was responded to an important demand. He said the TV station gained a considerable audience throughout its six years and hoped it would have more audience "from countries in our proximity," referring to Iraq, Iran and other countries in the Middle East with sizeable Kurdish populations.

The TRT chief also announced new joint projects with "our brothers speaking Kurdish in this region" and said these joint programmes would be aired "soon" without elaborating. Turkey has close ties with the Kurdistan Regional Government (KRG), the semi-autonomous entity that controls Northern Iraq where a large Kurdish population lives.

The Kurdish-language station began 24-hour broadcasting on January 1, 2009, as part of the government's efforts to cater to the needs of the Kurdish audience and was hailed as a landmark move in a country where speaking Kurdish in public was once a taboo. Then Prime Minister Recep Tayyip Erdoğan had become the first Turkish leader speaking Kurdish when he announced the launch of the channel by stating, "May TRT Şeş be beneficial" in Kurdish. The Kurdish community welcomed the move, which was seen as an effort to win the hearts and minds of the Kurdish population who suffered under previous governments.

A radio station accompanies the channel, which broadcasts programs and TV series in the Kurmanji, Sorani and Zazaki dialects of Kurdish.

The government had initiated a "democratic opening" to restore the rights of Kurds. The community, which fell victim to a brutal campaign of terror by the PKK and an equally violent state crackdown to contain it, now enjoys a return to calm in southeastern and eastern Turkey. Additionally, education in Kurdish was granted by the state, and in 2012, Kurdish lessons were introduced in public schools. The language was not recognized by the state for years in light of a hostile policy towards the community.

Since the PKK grew in strength, it was unofficial state policy to exert pressure on Kurdish civilians to eradicate the PKK threat. Those efforts to curb the Kurdish public's support for the PKK backfired and instead alienated the community. It also dealt a blow to the economic development of southeastern and eastern Turkey, where the PKK concentrated its bloody campaign.

Removing a ban on education in Kurdish was one of the Justice and Development Party (AK Party) government's first steps to address the problems of the community.