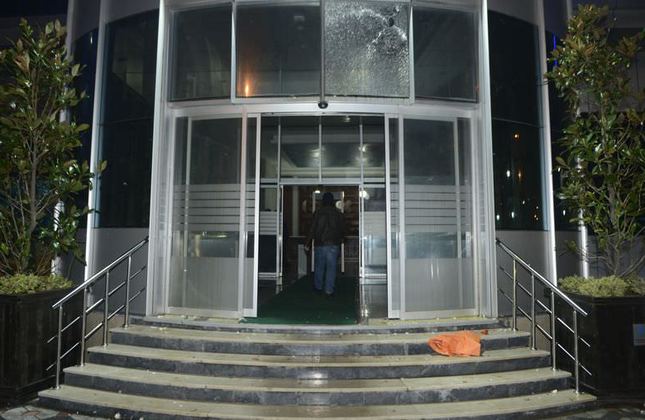 by Daily Sabah Jan 15, 2015 12:00 am
A group of rioters pelted the headquarters of Turkish newspaper Yeni Akit in Istanbul with stones and eggs on Wednesday night during a protest against "insulting" images of Mustafa Kemal Atatürk, founder of the Republic of Turkey.

The group gathered outside newspaper's office after doctored images showing Atatürk bruised and beaten and wearing a hat with the Star of David surfaced on a social media account allegedly linked to the conservative daily. Some 200 people chanted slogans against the daily and some protesters then hurled eggs and stones on the building as well as employees' cars outside the building in Istanbul's Halkalı district.

Two of the newspaper's staff members were injured by stones, while gunshots were heard during the protest. Protesters claimed the gunshots were fired from the building, while Yeni Akit denied the allegation. Police squads arriving at the scene warned the group to disperse. Protesters later dispersed while police were deployed at the building against a renewed protest.

Yeni Akit officials denied that they published images of Atatürk, and pointed out that the account "akitgazetem," which published them, was not their verified Twitter account. Images were released with an attached message stating "Those insulting our prophet should accept our freedom," in reference to support for the French weekly Charlie Hebdo that released a cartoon of Prophet Muhammad.

The protest and attack was reportedly organized by a local branch of the Nationalist Movement Party (MHP). A group describing themselves as members of the Fatih branch of the opposition party had earlier staged a protest against Cumhuriyet daily, which published the caricature of Prophet Muhammad on Wednesday.

Footage recorded by one of the protesters released after the incidents show the group arguing with the Yeni Akit staff. Seven gunshots are heard in the footage, but it is not clear who fired them. The group is heard chanting slogans "We are Turkish, we are Atatürkists" and one of them makes the "grey wolf" gesture adopted by the MHP.

Yeni Akit officials claimed the police arrived at the scene late despite their calls.

Meanwhile, the office of a Yeni Akit journalist in Sakarya, a northwestern province, was attacked by unidentified suspects hurling stones at the building on Wednesday night. Windows of the office were smashed as well as the windscreens of cars parked outside the building. Police launched an investigation into the incident.

Insulting Atatürk, a founding father figure of modern Turkey carries a prison sentence of up to three years, and even the slightest criticism of Turkey's first president is considered taboo among secular and hardline nationalist circles.