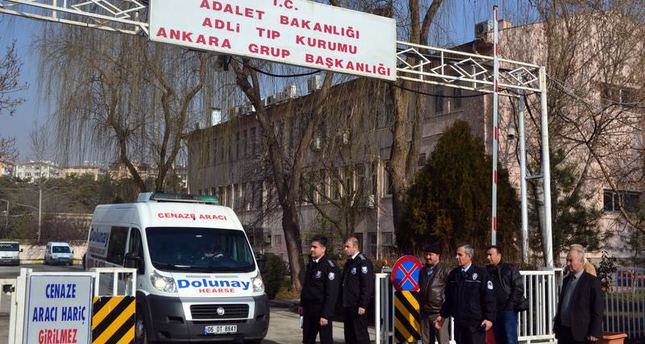 by Yüksel Temel Jan 17, 2015 12:00 am
The family of Erdem Uğur, an engineer working at Turkey's top defense contractor ASELSAN, claimed that the 28-year-old man was not suicidal after he was found dead after a gas leak on Thursday.

The prosecutor's office launched an investigation into Uğur's death at his home in the capital Ankara, where ASELSAN is based, while his family filed a petition to the prosecutor to treat it as a suspicious death. The initial investigation claimed he committed suicide. His parents told the prosecutor that Uğur did not have any issues that would lead to a suicide and was planning to move into a new house they had bought for him in February.

Investigators are now questioning the engineer's co-workers, friends and neighbors as well as examining his cellphone and computer. Uğur had been working as a measurement and calibration engineer for ASELSAN since last year, testing the products that the company manufactures.

His body was found next to a gas cylinder with a dismounted gas pipe. Police sources said he ordered the gas cylinder two days before his death. No sign of struggle was found on the body, and there were no traces of drugs or alcohol in his system.

Uğur is the latest victim of a string of deaths associated with ASELSAN. The series of suspicious deaths began in 2006 when engineer Hüseyin Başbilen was found dead in his car in the capital Ankara with cuts on his wrists and neck. Seven months after the death of Başbilen, Halim Ünsem Ünal, 29, another ASELSAN employee, was found with a bullet in his head in Ankara's Gölbaşı district. One week later, Evrim Yançeken, an ASELSAN electrical engineer, fell from the balcony of his apartment on the sixth floor and died. In 2008, Zafer Oluk, a former employee of ASELSAN, who was working on secret projects according to media reports, died of electrocution during his compulsory service in the Turkish army. One year later, Burhaneddin Volkan was found dead with a bullet in his head in a commander's room while he was serving in the army. All deaths were either ruled as suicide or as, in the case of Oluk, an accident. On Friday, opposition lawmakers called on the government to carry out an investigation into all the deaths related to ASELSAN. Sezgin Tanrıkulu, from the opposition Republican People's Party (CHP), asked the Prime Minister on which projects Erdem Uğur had been working and whether Uğur and other engineers were receiving psychiatric support. Tanrıkulu also asked whether the deaths were properly investigated.

ASELSAN is a company operated by a foundation established by the army. It designs, develops and manufactures military communication systems, radar and electronic warfare systems, electro-optical systems, and defense and weapon systems for the army. It is also among the major defense exporters. The deaths of its engineers have led to conspiracy theories that claim that the engineers were killed to prevent Turkey's development of domestic weapons.