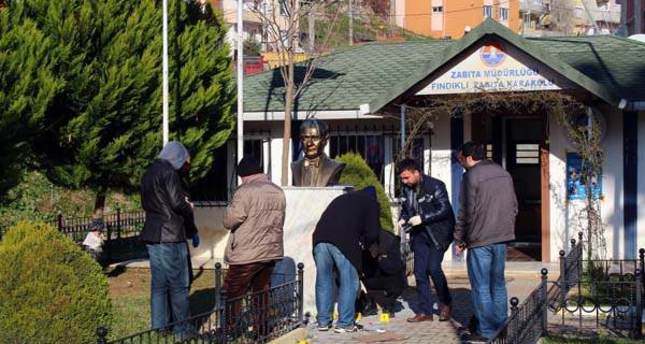 by Daily Sabah Jan 18, 2015 12:00 am
A handmade grenade which was found near a police station in Maltepe district of Istanbul on Sunday has been detonated under control by bomb experts. A note on the package read "They will account for Cizre."

According to reports, locals in Maltepe district of Istanbul noticed a suspicious package near a police station and notified officers. Upon receiving a tip-off, the police arrived at the scene and saw a package with the words 'They will account for Cizre' written on it. The officers called bomb experts to the scene after growing suspicions, and the bomb, which was believed to be active, was detonated under control. Experts later took the particles from the bomb for further investigation.

There have been ongoing provocative attacks against police and security officials in Cizre district, in addition to clashes between the radical PKK supporters and anti- PKK groups in the area.

Meanwhile another bomb is reported to have blown up in Fatih district of Istanbul early on Sunday. The explosion occurred near a power transformer. Police arrived at the scene after having been notified by locals. Bomb experts who were also dispatched to the scene explained it was a handmade grenade. No casualties or injury were reported.

The investigation into both incidents is still ongoing.

These incidents occurred after two explosives were found near two shopping malls in Istanbul last Saturday, causing panic among the commuters. The first incident took place in Başakşehir district of İstanbul and the other took place in Sefaköy district of Istanbul.