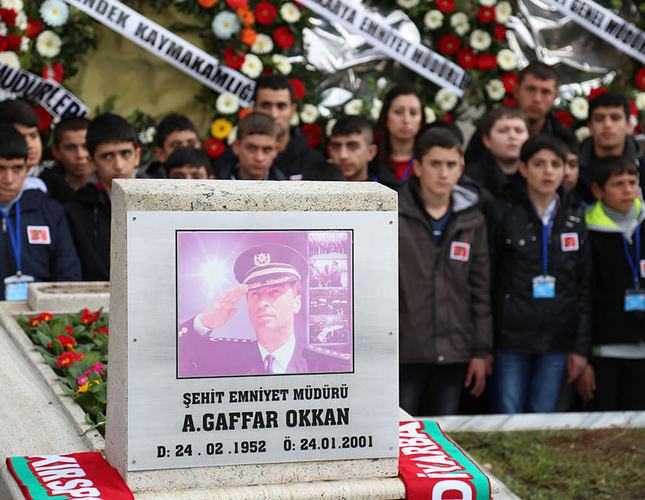 by Daily Sabah with Wires Jan 24, 2015 12:00 am
Legendary police chief Ali Gaffar Okkan and five police officers were commemorated on Saturday in ceremonies in southeastern province of Diyarbakır and Okkan's hometown Hendek in the northern province of Sakarya.

Okkan and police officers Mehmet Kamalı, Sabri Kün, Mehmet Sepetçi, Atilla Durmuş ve Selahattin Baysoy were killed in an ambush on January 24, 2001 in Diyarbakır. Although none of the terrorist groups assumed responsibility for the attack, it was largely attributed to Turkish-Kurdish Hezbollah terrorist group as well as their links with the paramilitary JİTEM organization. Okkan had played a key role on the crackdown against the group in operations throughout Turkey and in Diyarbakır, in which he was serving as provincial police chief when he was ambushed.

Diyarbakır Governor Hüseyin Aksoy stressed Okkan's difference on his dialogue with Diyarbakır people, saying "After he was martyred in here, Diyarbakır's people showed their love and gratitude to Okkan through naming their children after him."

Okkan's relatives, AK Party deputies, Diyarbakırspor fans, veterans and children named Ali Gaffar were among the participants of the ceremony.

In his hometown Hendek, a ceremony was held near Okkan's tomb. His family were present at the ceremony, as well as 102 children named "Gaffar Okkan" from Diyarbakır.

Following a decade of terror and bloody conflicts among the PKK, Hezbollah and security forces, Okkan's work in Diyarbakır was crucial to help the city to recover. His efforts changed the attitude of police officers towards local people, and he was in constant touch with Diyarbakır people to solve their problems, even beyond criminal extent. During Okkan's term, social life rekindled in Diyarbakır, and his was a prominent fan of local football club Diyarbakırspor, attending most of its matches.

When he was murdered, hundreds of thousands people united in a rally in Diyarbakır to condemn the attack.