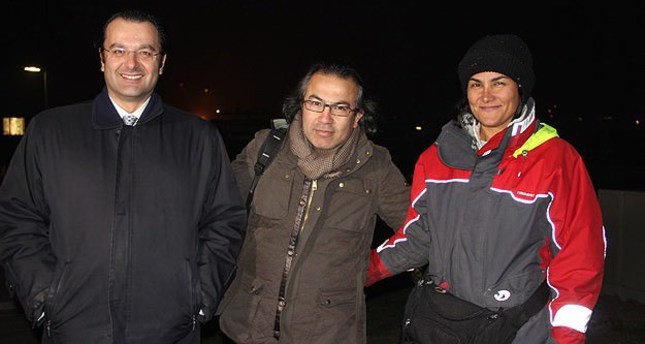 by Anadolu Agency Jan 24, 2015 12:00 am
A Turkish female sailor, who was rescued by a Russian cargo vessel in the middle of the Atlantic Ocean, has arrived in the Dutch seaport of Rotterdam on Friday, alive and well.

Dilek Ergul, who had departed from Santiago Island in the Caribbean Sea on Jan. 11 for a solitary trek across the Atlantic Ocean, was shipwrecked off Cape Verde two days later.

Welcomed by Togan Oran, consul-general of Turkey in Rotterdam, Ergul said: "On the second day of the trip, Symina, my sailboat, crashed into something and I lost control of steering. I tried hard to save my sail but could not."

"A Russian cargo ship, KP Albatross, replied to my mayday calls and they saved me," said Ergul.

She arrived in Rotterdam after a nine-day trip with the Russian cargo. According to Ergul, the solitary crossing of the Atlantic Ocean was a charity project for orphan girls studying at Darussafaka Schools, Turkish establishments that provide "equality of opportunity in education" for children who have lost their parents.

"We were aiming to raise 1 million Turkish liras (approx. $425 million) to educate 10 girls studying at Darussafaka for 10 years. We have already raised enough money to educate one girl," Ergul said.

Ergul, who plans to cross the Atlantic again, said: "I hope I can make it next time."