Turkey surpasses US in humanitarian aid across world 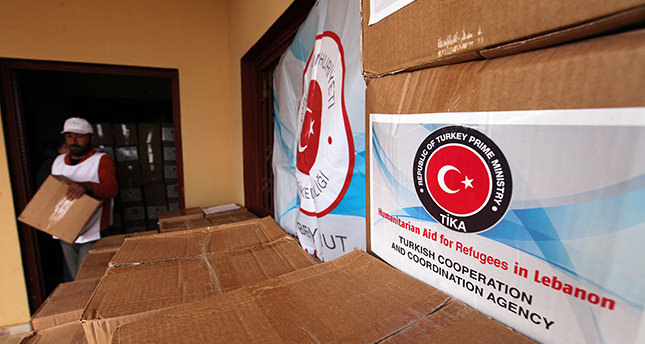 by Anadolu Agency Jan 26, 2015 12:00 am
Turkey has distributed a huge amount of humanitarian aid worldwide and has even outpaced the U.S., which is second only to Turkey.
Fuat Oktay, the head of the Turkish relief agency Disaster and Emergency Management Authority (AFAD), said that Turkish people throughout history have been well-known for their charitable traits.

"Turkey reaches out to all people who have a problem and is thanked for its assistance," said Oktay.

Touching on the U.N.'s report that shows the countries which provide the most aid around the world, Oktay said the most generous countries were the U.S., the U.K. and Turkey respectively in 2012 and 2013.

"But, according to the numbers in 2013, when we look at gross national product, Turkey is the country which provided the most assistance," said Oktay.

"Turkey is not only in Syria and Iraq, but also in the Philippines, Bosnia and Serbia as well as Gaza, Somalia and other parts of Africa," he added.

Turkey will continue to extend its hand to oppressed peoples, said Oktay, adding that Turkey will host the World Humanitarian Summit, an initiative of U.N. Secretary-General Ban Ki-moon, in 2016.

"Turkey will present its message [on humanitarian aid] to all states and nations at the summit," he said.

The country has given millions of dollars to Syria and Iraq as well as other countries hit by crises or natural disasters since 2012.

It has outpaced many countries in terms of humanitarian aid distributed across the world, taking sides with destitute people regardless of their language, religion, race or sect.

Turkey has embraced Syrian refugees fleeing civil war, Palestinians suffering Israeli offensives in Gaza, Yezidis awaiting aid due to the advance of the Islamic State of Iraq and al-Sham (ISIS) and Syrian Kurds fleeing clashes between militants and Kurdish fighters in the Tukish-Syria border town of Kobani.