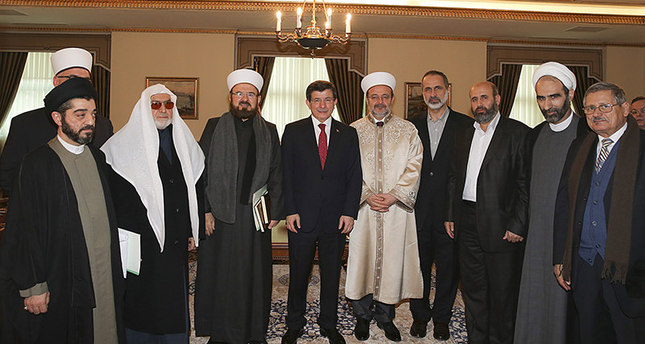 A group of Muslim clerics from around the world, headed by Turkey’s Presidency of Religious Affairs, have announced the launch of a new initiative to stand against Islamophobia and sectarian conflicts between Muslims

Mehmet Görmez, the head of the Presidency of Religious Affairs (DİB), held a press conference yesterday in the Turkish capital of Ankara where he revealed a letter of goodwill composed by the Peace and Moderation Permanent Contact Group, a group of prominent clerics from around the world. The group will visit several countries and present the letter to heads of state and religious bodies in the Muslim world.

The group held talks with President Recep Tayyip Erdoğan and Prime Minister Ahmet Davutoğlu on Monday. Erdoğan and Davutoğlu were the first recipients of the letter.

Speaking at the press conference, Görmez said the letter may be modified in accordance with the "special circumstances" in each of the individual countries that they will visit but its main theme, which focuses on establishing peace in the Islamic world, will not be changed.

The letter says the Muslim world is going through difficult times and faces uncertainty over its future due to internal and external factors. It underlines that infighting in Muslim communities tends to escalate into conflicts.

"Murders, suicide bombings, abductions of innocent people, bombing of mosques, desecration of sacred sites and displacement of millions of people are not only a threat to the people affected by these but also to the perception of Islam. These lead to Muslims around the world feeling shame. In return, Muslims in the countries where they constitute a minority face social exclusion and alienation. They face the threat of violence, fear and ostracization," the letter says.

The letter claims Islamophobia has turned into an industry with merciless propaganda against Muslims based on conflicts in the Muslim world and aimed at spreading fear of Islam in the wider public. "This situation, which will be more devastating in the future, hurts the conscience of many in the silent majority," the letter said. It noted that Islamic countries that have been synonymous with peace until recently are now known for chaos, clashes and deaths, despite the common message of the prophets of all religions and Islam, which is "peace."

"Islam's message calls for universal peace and orders its followers not to kill, not to oppress others, not to incite strife and protect others' lives, dignity and honor," it adds.

The contact group founded last year in Turkey seeks the "prevalence of social peace and establishment of brotherhood of Muslims across the world," according to the letter. The group will carry out efforts to end the conflicts and "spread the language of peace." The letter says the group will seek solutions to the conflicts in the framework of religion and lobby at international organizations to marginalize groups that conduct acts of terrorism and violence within the Muslim world.

"Regardless of their sect and ethnicity, all clerics will work to maintain peace and moderation in the Islamic world and connect with each other to promote coexistence and openness to dialogue," the letter said.

Görmez said at the press conference that the group would act "like the ant carrying a drop of water to extinguish the fire that Prophet Ibrahim (Abraham) has burned." He said the group's work will not be confined to words and they will actively pursue their goal to establish unity in the Muslim world again, as it was in the past.

"It is time to put aside sectarian differences when the bloodshed spreads throughout the world. It is time to rebuild the Muslim identity. Arabs, Turks, Sunnis and Shiites are not superior to each other. We are the members of the same ummah (community of Muslims) and should work for rights and justice," he said.

Görmez pointed out that some young Muslims tend to identify Islam with violence and distance themselves from the religion. "We failed to leave them a world where leading a life like Prophet Muhammad is possible. I would like to tell these youth that they should have the prophet as their guide," he said.

Görmez urged clerics to focus on the problems that the Islamic world is facing. "You cannot merely focus on Islam's orders about daily life, like what is forbidden while fasting, when there is ongoing bloodshed. We neglect to tell people how forbidden it is in Islam to take even one person's life. We should tell the youth, the community how dropping bombs on people performing prayers devastates the unity of the Muslim community," he said.