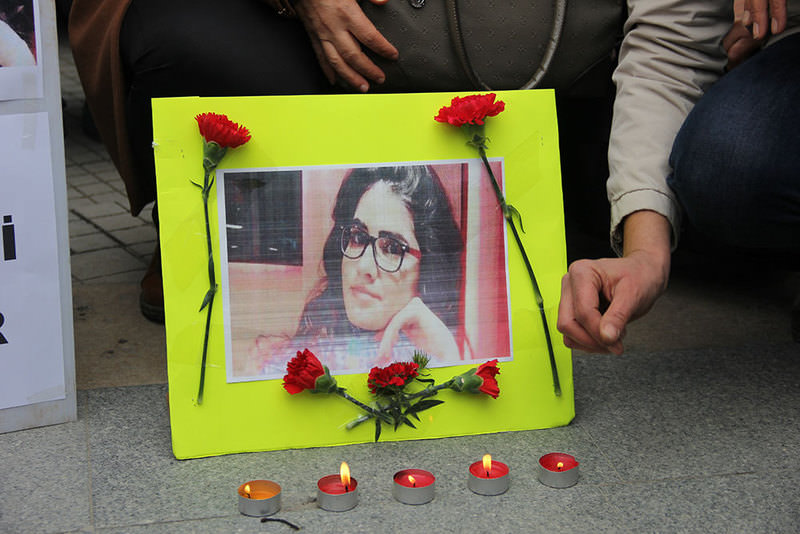 The vicious murder of Özgecan Aslan, 20, has caused nationwide protests and calls for tougher sentences toward those guilty of violence against women. Politicians of all stripes condemned the murder of the university student, while the gendarmerie and police are cooperating on the case. Hundreds in Mersin tried to lynch the suspects as they were transported to the court for questioning.

Aslan was first reported as missing by her mother on Thursday. Investigation showed that Aslan, who boarded a minibus from Tarsus to go home to Mersin late Wednesday was attacked by the driver, Suphi Altındöken, 26, when she remained the sole passenger on the minibus. She resisted the driver's attack with pepper spray but was stabbed and then clubbed with an iron bar to death. The driver later returned to Tarsus and asked for help from his father and a friend, who joined him to dispose of the body. The driver, when questioned, admitted the murder and told the police that they went to a wooded area and burned the body to destroy the evidence.

He said he cut off her hands because she had clawed his face in desperation and that he wanted to prevent identification through DNA analysis. Altındöken, a father of one, was caught when the local gendarmerie officials became suspicious because the minibus was not following the normal route to Mersin. Officials found blood and the hat Aslan was wearing in the minibus on the day, which was identified by her father, after which the suspect admitted the crime. The forensic examination will reveal whether Aslan was sexually assaulted or not.

The entire nation was united in grief and anger after Aslan's body was found on Friday, with politicians lining up to extend their condolences to the Aslan family.

Prime Minister Ahmet Davutoğlu, speaking yesterday at the Justice and Development Party (AK Party) Antalya Women's Branch convention, said he condemned the violent attack on Aslan, adding, "I hope those who perpetrated such an attack will be punished to the full extent of the law. I talked to her mother Songül and extended my condolences. We will do what is necessary to prevent the repeat of such violence."

He said the government would name the youth center to be opened soon after Aslan. "Our aim is to ensure no one forgets this pain. May those hands that strike at women be broken. As a person who lost his mother at birth, I know our main duty is to protect our mothers and women. We are mobilizing to end violence against women. Women need to rise up and raise their voice," he said.

President Recep Tayyip Erdoğan and his wife Emine Erdoğan individually called the Aslan family to extend their condolences and condemned the murder. Erdoğan's daughters, Sümeyya Erdoğan and Esra Albayrak, visited the home of the grieving family yesterday. Speaking during the visit, Songül Aslan said, "My angel-faced daughter. I gave my all to ensure my children got a good education and lead good lives. And this monster comes and kills my child. My child didn't deserve this. I want the culprits to be punished severely. What right do they have to take her away from me?"

Speaking after the visit, Sümeyye Erdoğan said words lost their meaning when faced with such tragedy, adding, "We came to share her grief. We will do our utmost to ensure the culprits get their just punishment. We as Women and Democracy Association (KADEM) are here and will follow this case to its conclusion."

Aslan's funeral was held in Mersin on Saturday, where women carried the coffin of the murdered girl. Nationwide protests accompanied the funeral, where tens of thousands condemned violence against women.

Songül Aslan called for the return of capital punishment during the funeral, which later received support from Energy Minister Nihat Zeybekci. Family Minister Ayşenur İslam, during her visit to the home of the Aslan family, said such matters could be discussed later but now was a time of mourning and crying.

The head of the Parliamentary Commission to investigate causes of violence against women, Alev Dedegil, said yesterday that no punishment would satiate the feeling on vengeance produced in the society due to such a crime, adding that there should be a public debate on capital punishment for certain crimes.

Turkey abolished capital punishment in 2004 as part of its drive to join the European Union. The last execution in Turkey took place in 1984, after which no Parliament gave the necessary approval and as a result all were commuted to life imprisonment.