Turkish jetliner skids off on runway in Nepal 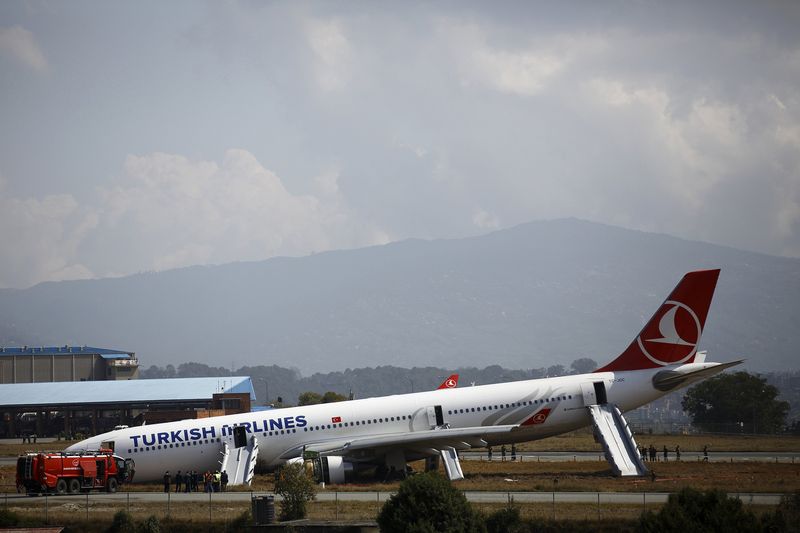 by Mar 04, 2015 12:00 am
A Turkish Airlines plane carrying 224 passengers had to be evacuated after it skidded off the runway upon landing at Kathmandu airport yesterday and ended up on grassland.

Nepal aviation officials said no one on board was injured, although one witness described how terrified passengers leapt from their seats as the cabin filled with smoke after the plane skidded to a halt.

Airport spokesman Purna Prasad Chudal said the pilot overshot the runway during an initial attempt to land, before making a second try that sent the plane skidding off the tarmac.

"As the plane approached, it somehow missed the runway and ended up in the grassland area," said the airport's general manager Birendra Prasad Shrestha.

"All 224 passengers have been evacuated, no injuries; everyone is safe," Shrestha told AFP.

Technicians were unable to remove the damaged Airbus A330 in the absence of suitable equipment, and the runway has been closed for international flights until Thursday evening.

"We are trying to bring specialized removal equipment from India tomorrow morning in an army plane that can land on the available stretch of runway," another airport official, Bharat Kumar Shrestha, told AFP.

Photos on social media showed the jet with its nose in the ground. Local newspaper reports said its landing gear appeared to have collapsed.

Dikesh Malhotra, who was returning from a business trip, said the impact of the landing caused bags to fall on terrified passengers, who clutched their seats, anxiously waiting for the plane to stop moving.

"We could feel the tires skid … I could see an air hostess from my seat, she had tears in her eyes," Malhotra, 28, told AFP. When the plane stopped, smoke filled the cabin and made it difficult to breathe, he said. "Everyone got up and started shouting to open the door... finally they announced the evacuation … we were so relieved," he added.

Chudal said officials would launch an investigation into the crash and question the pilot. "The plane had permission to land and while conditions were foggy earlier, visibility was ok," Chudal told AFP. "We are not sure how this happened."

The Himalayan nation is home to some of the world's most remote and tricky runways, flanked by snow-capped peaks and terrain that poses a challenge even for accomplished pilots. A string of crashes as well as the European Union's decision to blacklist all Nepalese airlines prompted government officials last year to announce plans to install new radar and weather monitoring systems.