Women to unite against violence on March 8 rally in Istanbul 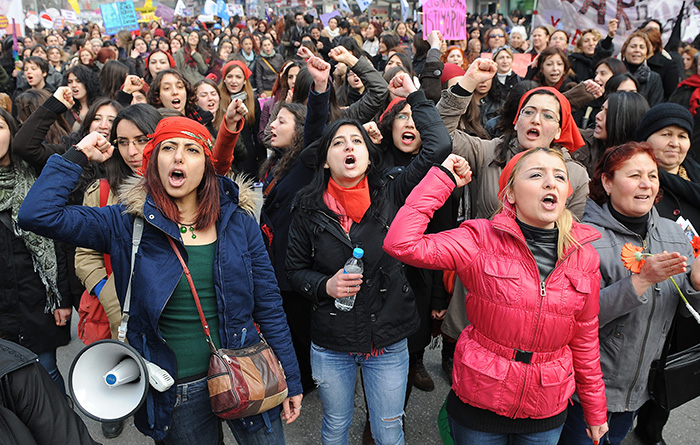 by Anadolu Agency Mar 05, 2015 12:00 am
Women's rights organizations are calling on Turkish females to attend an Istanbul rally on Sunday marking International Women's Day on March 8.

Istanbul March 8 Woman Platform - an umbrella organization that brings together Turkish women's rights groups - announced in a statement on Thursday that this year's event would be dedicated to Ozgecan Aslan, a 20-year-old student who was murdered while resisting sexual assault, "as well as to thousands of women who have lost their lives at home, in streets or wars as a result of male-state violence."

Violence against women has become an important issue in Turkey after the brutal murder of Aslan in the southern province of Mersin in February.

Hundreds of people gathered across the country to protest the murder, and even reawakened discussions on the death penalty in Turkey. The country abolished capital punishment in 2004, replacing it with aggravated life imprisonment.

A member of the woman's rights commission for Istanbul Human Rights Association, or IHD, Leyla Kaya, said that she hoped to have one of Turkey's biggest rallies on Sunday.

The groups will meet at 12:00 (1000 GMT) in Istanbul's Anatolian-side district of Kadikoy and the event will continue until 6:00 p.m. (1600 GMT) as there is a derby game between football rival teams, Galatasaray and Fenerbahce.

"Mainly woman police officers will be working during the march," Kaya said.

According to information gathered from Turkish press reports by the Istanbul Human Rights Association, 28 women were killed and 38 women were injured by men in January while in February, 24 women were murdered and 17 were injured.