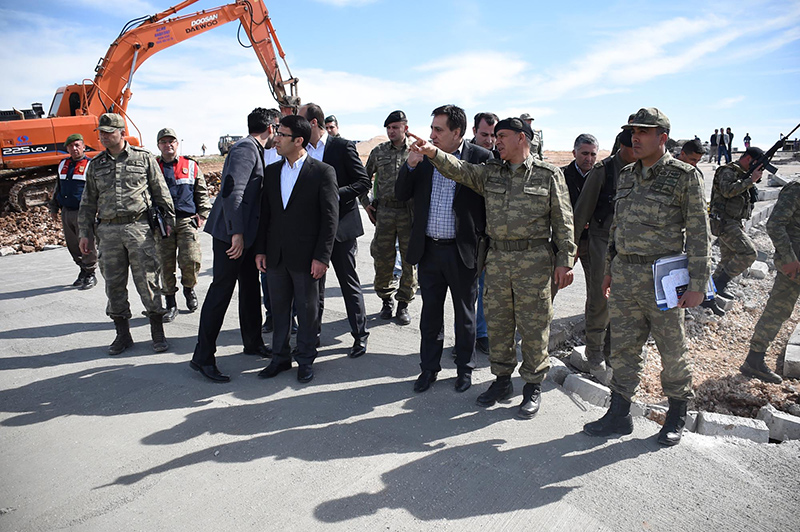 by Nurbanu Kızıl Mar 09, 2015 12:00 am
İzzettin Küçük, the Governor of Turkey's southeastern Şanlıurfa province, has announced that the Süleyman Shah compound which is currently being constructed in Ashmeh village in Syria is expected to be completed in a few days.

Governor Küçük on Sunday paid a visit to the compound, which is currently under construction, accompanied bywith Deniz Zeyrek, the district governor of Birecik and İhsan Başbozkurt, a brigade commander. The group crossed the border and inspected the compound in which the Tomb of Süleyman Shah is currently being constructed.

Küçük stated that the construction of the tomb is almost finished and that the remains of Süleyman Shah and two Turkish soldiers should be transferred there shortly afterin no time.

"There are serious efforts to finish the construction of the tomb in the Syrian village of Ashmeh" said Küçük, adding that the complex will be open for visits once completed.

Küçük also noted that he had visited the Syrian village and that thee people there were very enthusiastic about the relocation of the tomb toin their town. "It is an honor for many people to have such an important figure's tomb in their town" Küçük added, noting that Turkish government institutions are taking care of the needs of the town and its surroundings.

On February 22, the Turkish military successfully relocated the tomb of Süleyman Shah, the grandfather of the founder of the Ottoman Empire, and extracted 40 soldiers guarding the compound in Syria. Control over the tomb was given to Turkey by the Treaty of Ankara after the Ottoman Empire lost Syria in World War I. The tomb had already beenwas relocated twice before the recent relocation due to threat of flooding.