'ISIS was about to blow up Suleyman Shah’s Tomb': Turkish soldiers 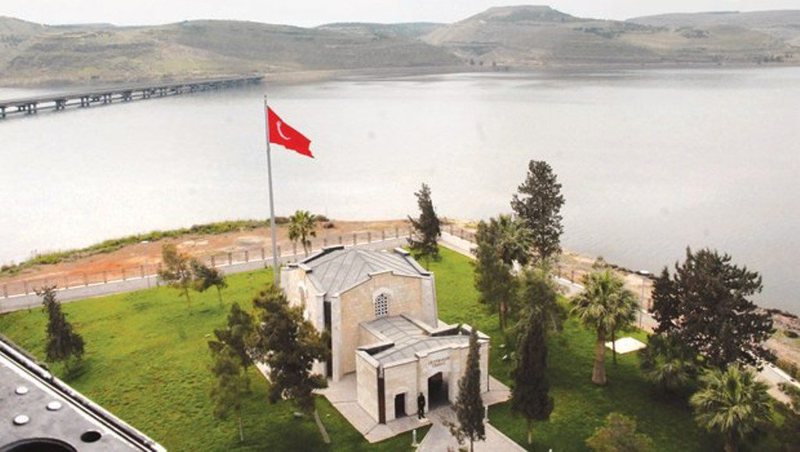 by Daily Sabah with Wires Mar 10, 2015 12:00 am
The self-proclaimed Islamic State of Iraq and al-Sham (ISIS) had threatened Turkish soldiers guarding Suleyman Shah's tomb by placing explosives in tunnels dug under the tomb, according to the soldiers' accounts which have started leaking into media outlets.

Former member and adviser of the Turkish Special Forces, and current security policies specialist, Metin Gürcan has written an article about the accounts of 38 soldiers who were on duty at the tomb entitled "300 days at the Tomb of Suleiman Shah", which was published on international relations website al-monitor.com.

According to Gürcan's article, Turkey's Maroon Berets (military special units) said that ISIS militants initially acted warmly towards the Turkish soldiers, but their stance had changed after September 2014, especially among the ones who came from Yemen and Egypt. This was a result of the U.S. led anti-ISIS coalition's airstrikes against ISIS targets on the Raqqah - Akçakale road following the release of Turkey's Mosul consulate personnel, Gürcan said. He stated that ISIS had perceived that Turkey had informed coalition forces about the locations of targets, and subsequently increased their threats against the tomb.

Within the October-November 2014 period, Gürcan narrates that ISIS militants had repeated calls for Turkish soldiers to lower the Turkish flag and replace it with their black caliphate flag. In the same period, ISIS militants settled into a hut 300 meters away from the tomb to monitor the soldiers, power blackouts had increased and ISIS militants had come near the the tomb's entrance a couple of times and threatened Turkish soldiers. The soldiers had narrated the militants' point of view as "The Sunni world wants our blood. We should die so it can continue to live."

According to Turkish soldiers, the ISIS was successful due to sustaining the pace of combat, moving quickly and good logistical support enough to serve two hot meals a day, bottled water and good medical care for all its militants.

In November, a proposal to replace the soldiers was unfruitful due to insufficient coordination with local groups in Syria. Following this move, Gürcan quotes one officer as saying "When the idea didn't pan out, psychological warfare developed between us and ISIS." Another officer added, "We had brief chats with our families every few days by cellular phone. So as not to worry them, we didn't tell them that the risks at the tomb were getting worse and that there was no date set for our return.'

Two important developments had increased concerns on the Turkish side in February 2015. The first was that ISIS militants started to use the area near the tomb as a safe zone to avoid coalition airstrikes, and the second was the shift of clashes between the PYD and ISIS to further south near the tomb. Due to the possibility that the tomb cannot be defended as it is expected that the clashes to escalate with planned coalition attack on Mosul, Ankara decided to evacuate the tomb, as Gürcan quoted from Turkish journalist Abdülkadir Selvi that Turkish military and people could not carry the burden of an image similar to the Jordanian pilot burnt alive.