Ancient sundial to follow the sun in modern Turkish 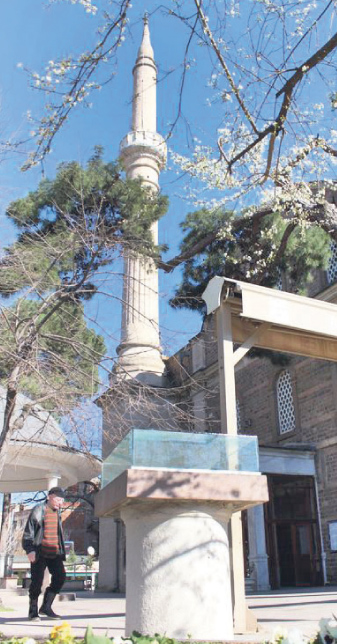 by Daily Sabah Mar 12, 2015 12:00 am
The 550-year-old sundial in Balıkesir's notable Zağnos Pasha Mosque will be replicated with new Turkish instructions soon. For many years, foreign tourists and local residents have not paid the sundial much attention. Muhammet Şakir Erarı, the head of the Provincial Foundations Directorate, told Anadolu Agency that the stone sundial was in use for 500 years, but had been neglected for the last 50 years. "It still works, but we are unable to read it. Locals look at it when they enter the mosque, but they, as well as the tourists, do not understand its function. A replica of the sundial will be soon designed in Turkish," he said. The new sundial will be placed next to the original version. Erarı said that the mosque will also be restored soon.

In the past, sundials were used to determine the time and correct prayer times throughout the year, Erarı explained, adding that the time of daily prayers is arranged according to the sun's position in the sky. "Prayer times were determined by using this sundial. People have been using wrist watches for the last 100 years, but before then, it was difficult to know prayer times. To avoid this problem, sundials were an efficient solution," he added. Erarı explained that the mosque is 600 years old and the sundial's markings are in the Ottoman language. The new sundial may help locals follow prayer times. The historical sundial displays months and seasons, he continued. "It is possible to call it a kind of time measurement device. Months were written down according to the Rumi calendar used in the Ottoman period," he said.

The Rumi calendar is a solar-based calendar and features months in the Ottoman language such as "Kanun-i Evvel" (December), "Kanun-i Sani" (January), "Teşrin-i Evvel" (October) and "Teşrini-Sani" (November). Erarı said the sundial has an arc with a nail in the middle of it. The shadow of the nail follows a reverse direction of the sun's rotation from east to west. When its shadow makes a zero angle with the nail, it means that the sun has reached its highest point in the sky. When the shadow begins to move to the east, which means the sun is moving toward the west, the noon prayer starts. Erarı said the afternoon prayer is understood by looking on special instructions and ranges on the sundial. "In the past, there were expert officials who could read sundials at mosques. They were called 'muvakkit,' and the place where they lived was called 'muvakkithane'," he explained. Erarı said that a new dial plate will be prepared for the new version.
Last Update: Mar 12, 2015 1:08 am
RELATED TOPICS