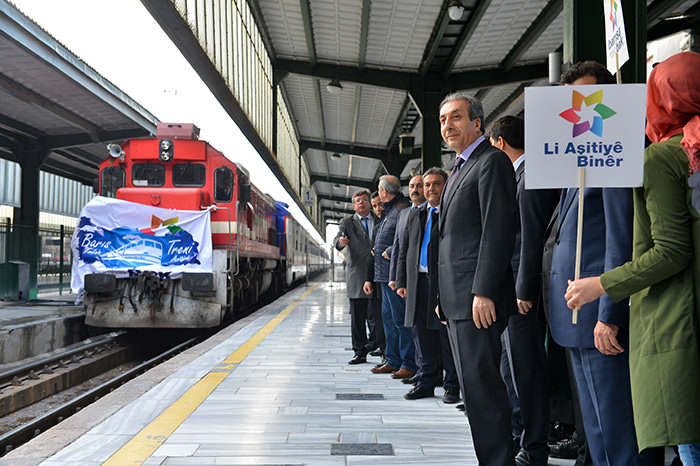 by Daily Sabah Mar 16, 2015 12:00 am
The Peace Train – a project carrying activists promoting Turkey's reconciliation process, which aims to put an end to decades of terrorism under the guise of Kurdish self-rule in the southeast – continues its journey through the country ahead of its planned arrival in Diyarbakır, a predominantly Kurdish province. Departing from Istanbul last week, the train arrived in the central Turkish city of Kayseri yesterday.

Organized by Barışa Bak (Look at Peace), a platform of nongovernmental organizations, the train stopped in the cities of Kocaeli, Eskişehir, Ankara and Kırıkkale. It will leave for Sivas, Malatya and Elazığ before a scheduled arrival in Diyarbakır on March 20. One day after its arrival in the southeastern city, activists will attend the annual Nevruz festival.

Activists will hold events in every city to drum up support for the reconciliation process, such as panels by prominent journalists, academics and dignitaries endorsing the project to elaborate on details of the process, petitions of support for the process and more.

Speaking in Kayseri, Barışa Bak spokesman Cengiz Alğan said they have received a warm welcome from the public in every city. He said 70 percent of the public support the process – according to recent surveys – which was evident in Kayseri. Alğan said that Turkey has suffered much in the past decades, and has seen "too much bloodshed and losses that brought the country to a halt instead of progress." Alğan added they hoped this spring would also be "a spring" for the resolution of the matter.

"The public throws its support behind the process. Receiving this support is essential to the works undertaken by relevant parties, such as the negotiations. We aim to garner further public support for the process via this project. We will deliver a message of peace that people in the cities where we stopped delivered to us and to the people in Diyarbakır, and we will return with their messages for people in the west," Alğan said.

The reconciliation process officially began two years ago. Last month, Abdullah Öcalan, the jailed leader of the terrorist organization PKK, called on the armed group to hold a congress to discuss disarmament, two years after the PKK announced it had "withdrawn" from Turkish territories to Northern Iraq, where it has hideouts on the Qandil Mountain. Öcalan is currently writing a letter that will be read out during the Nevruz festival on March 21, in an event expected to be attended by masses of Kurds and PKK supporters. The letter will likely reveal a detailed roadmap for the PKK's disarmament and other steps it is urged to follow as part of the reconciliation process.
Last Update: Mar 16, 2015 5:07 pm
RELATED TOPICS