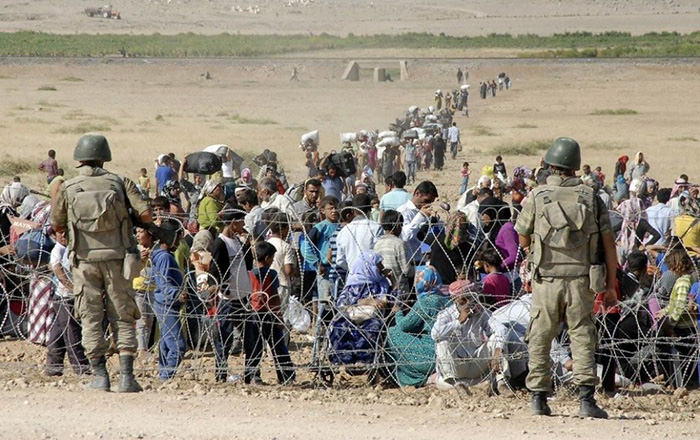 |Photo: AP
by Ahmet Topal Mar 16, 2015 12:00 am
Struggling to keep its lengthy border with Syria safe against infiltrations following the revelation of a plot by the Syrian regime to conduct attacks inside Turkish territory, the government will introduce fingerprint scanning and compulsory photo inspections on its southern border

Remaining vigilant about infiltrations from Syria, which is mired in a brutal conflict, Turkey is prepared to introduce mandatory fingerprint registration and photo inspections on the border with its southern neighbor.

An announcement made by Customs and Commerce Minister Nurettin Canikli came on the heels of media reports that Damascus is reportedly planning to stage attacks within Turkish territories ahead of June's general elections in Turkey through infiltrators.

Canikli said that the "lack of a proper state" in Syria has given rise to illegal crossings by people carrying forged or fabricated IDs and passports. He said everyone arriving from or departing to Syria will be required to provide a scan of their fingerprints and a photo "soon."

"It is impossible for someone to cross into Syria from Turkey or from Turkey into Syria if we have information that this person is a suspect. We will now introduce fingerprinting. It will be compulsory in all border crossings. It might also cover Iraq, although Iraq's crossings are busier than Syria," he said.

Canikli noted that a proper state did not exist in Syria and they had no chance to compare IDs. "We do not know for certain whether people traveling from Syria have an authenticated ID, and forgery is widespread both for Syrian IDs and passports. To prevent this, we will have people registered with photos and fingerprints," he said. The minister added that the application will also contribute to curbing the flow of foreign fighters into Syria via Turkey. "[Other countries] fail to provide us even a photo of those entering into Syria, but they raise their voice against Turkey. This is unfair," he said, referring to criticism of Turkey for allegedly allowing foreign fighters into Syria through its borders.

Border security is a major concern for Turkey, as it shares a 915 km-long border with Syria, and pursues an open-door policy for displaced Syrians fleeing the civil war. A significant number of troops were deployed on the border, as the conflict in Syria escalated over the past four years and border crossings are usually closed except in cases of an influx of civilians seeking shelter in the country. Most recently, nearly 250,000 Syrian Kurds from Kobani arrived in Turkey after the Islamic State of Iraq and al-Sham (ISIS) surrounded the town last fall. Moreover, the displaced are subject to registration before admission into Turkey.

Turkey is also concerned about foreign recruits of ISIS, and complains of the lack of intelligence sharing especially from Europe where the radical faction draws attraction among the youth persuaded online to join the group. Last month, three female British teens traveled to Syria via Turkey in a well-documented case of intelligence sharing failure. Turkey has accused the U.K. of not alerting it in time to stop the teens, and it was later revealed that their trip to Syria to join ISIS was arranged by a Syrian national reportedly working for the Canadian intelligence service.

Turkey is now on alert against a plot by the Bashar al-Assad regime. The regime will reportedly release imprisoned criminals in exchange for their cooperation in conducting attacks in Turkey, according to an article in Sabah daily. Assad will reportedly free criminals who have been trained over the course of a year with the purpose of using them in the civil war and launch planned attacks in Turkey. Assad's other target appears to be Syrian rebels, which have been backed by the Turkish government since the onset of the Syrian war, and who have recently mustered further support from Western governments.

Turkey tightened its border security with Syria at two of its border gates – Öncüpınar and Cilvegözü – on March 9 to counteract the intelligence claims. No crossing of people, goods or vehicles – except the ones with "special permission" – will be allowed until a second order is given. Furthermore, the Turkish Armed Forces (TSK) has been reportedly keeping all the entrance and exits under strict control.

The enhanced border security measures have been taken to protect against Assad's reported plan to free prisoners, who are estimated to number around 1,000, and have been tasked with infiltrating Turkey, posing as needy refugees. It is feared they plan to conduct an attack similar to the two 2013 bombings in Reyhanlı, a town in the southern province of Hatay that neighbors Syria, which killed 53 people.
Last Update: Mar 16, 2015 5:05 pm
RELATED TOPICS