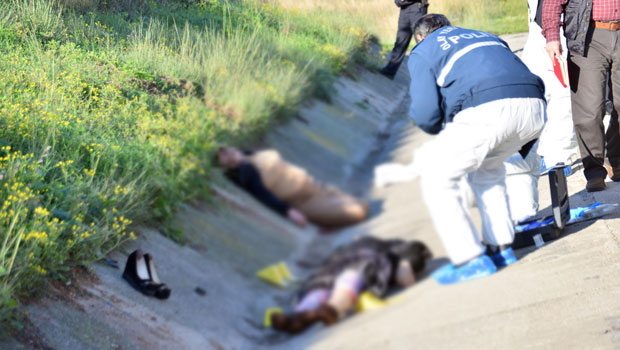 | Photo: DHA
by Didem Atakan Mar 16, 2015 12:00 am
The bodies of two women, a mother and daughter, have been found in the southern city of Adana, in a ditch close to the toll gates of the Tarsus-Adana-Gaziantep Highway (TAG). The bodies of the 47-year old Semire Balık and 23-year old Ayşe Işık, were found early on Monday morning.

Semire Balık had been killed by five bullets, two to the chest, two to the head, and one to the leg, while Ayşe Işık (who was married) was shot three times in the chest and the head, according to reports. The police have been searching for the father and the son, Hüseyin Balık and Abdullah, who are believed to have killed the two women and have been missing for the last two days.

Semire Balık and the suspect Hüseyin Balık divorced four years ago. Since then, Semire Balık, her daughter and her son-in law, Metin Işık, have been reportedly living together in the same house in the southeastern city of Mersin. The son in-law, Metin Işık had allegedly forced his wife into prostitution, which was reportedly discovered by the woman's father and brother. Metin Işık is believed to have escaped the execution by fleeing to another city.

Violence against women is Turkey's "bleeding wound", as President Recep Tayyip Erdoğan said in February, after the brutal death of Özgecan Aslan, a 20-year-old university student. Despite rising nation-wide protests against violence against women and social campaigns – especially following Aslan's murder – the recent murders suggest that "Turkey's bleeding wound" will not heal that quickly.

The legal framework, which has been improved in recent years, is not the reason for persistence violence, say many politicians, but the problem lies instead with implementation of the laws as well as the "mentality" ingrained in culture.

Nearly 6,000 women were under state protection in 2013, according to various reports, with some measures being taken to ensure restraining orders against offenders, including using electronic ankle bracelets, but the system is unable to stop violence.