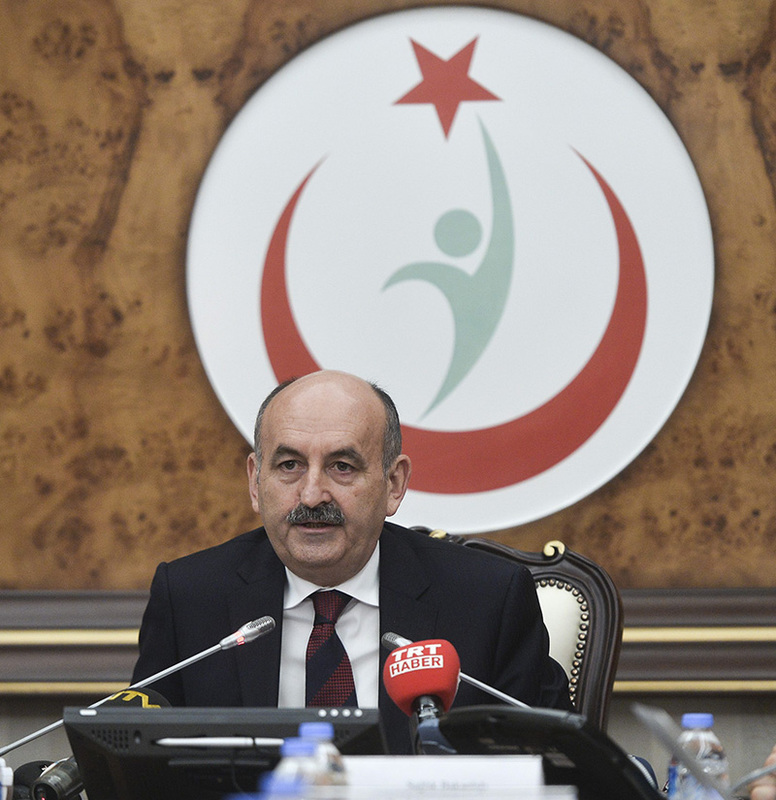 | Photo: AA
by Anadolu Agency Mar 25, 2015 12:00 am
The Turkish Minister of Health Mehmet Müezzinoğlu announced yesterday that the number of people who have died of swine flu has risen to 33 from 30 over the past two days, and said they expected "peak season" to end soon and the number of cases to decrease.

As daily reports of swine flu cases raise concerns among the public, Minister of Health, Mehmet Müezzinoğlu, said the number of fatalities from the deadly H1N1 virus has increased by three since Monday, reaching 33. The minister claimed cases have already "peaked" and they believed the number of cases will start to decrease this week, ruling out a nationwide outbreak.

According to the ministry's figures, 366 patients were diagnosed with the H1N1 virus out of 4,300 suspicious cases. Five people died of Influenza B, four of H3N2 and 33 of H1N1.

Müezzinoğlu said the influenza virus has more than 300 strains, including mutating ones, and posed a challenge to developing an effective vaccine. He noted that vaccines' efficiency at times had dropped to 30 percent.

Citing that Turkey joined France, the Netherlands and Spain in terms of a sudden surge in flu cases late February and early March, Müezzinoğlu noted that the flu season was usually between October and April every year.

The minister ruled out a case of a nationwide epidemic and assured people that measures were in place. "We did not receive an influx of cases although there was a rise in the cases," he added.

The influenza virus particularly affects patients above the age of 65 and those with existing lung, kidney and liver diseases. Most casualties with swine flu came from these patient groups.

Istanbul, the country's largest city with a population over 14 million, has the most casualties from swine flu at nine. It is followed by Samsun in northern Turkey with seven deaths. Müezzinoğlu said more than half the deaths were senior citizens above the age of 65 and others were those between the ages of 25 and 55.

The minister warned that a person can be infected with the virus if he or she is at a distance of one meter from the infected person. "You are at a risk, for instance, if you are closer than one meter to an infected person sneezing," he said. He urged the public to be cautious about their hygiene and ventilation of residential areas as a precaution against the virus.

In February, the World Health Organization (WHO) warned that the world remains highly vulnerable to a severe flu pandemic, and called on governments to take measures. In a comprehensive report on several strains of flu viruses, WHO officials said although progress has been made in virology that enables the better detection and assessment of new viruses for pandemic risk, more research was needed to develop better vaccines and shorten the production time, as the evolution of the viruses led to a decrease in the effectiveness of currently available vaccines.

Swine flu was first reported in Turkey in 2009. Initially a strain of flu transmitted to humans from pigs, it mutated into a virus that can be transmitted between humans. Its main symptoms are fever, cough, an aching throat and joint pains. It is an airborne virus that spreads through coughing and sneezing, and doctors warn the public to wash their hands frequently and stay away from suspected patients. The virus is usually lethal among pregnant mothers and infants, although it can affect those with existing chronic illnesses and a weak immune system.
Last Update: Mar 25, 2015 4:41 pm
RELATED TOPICS