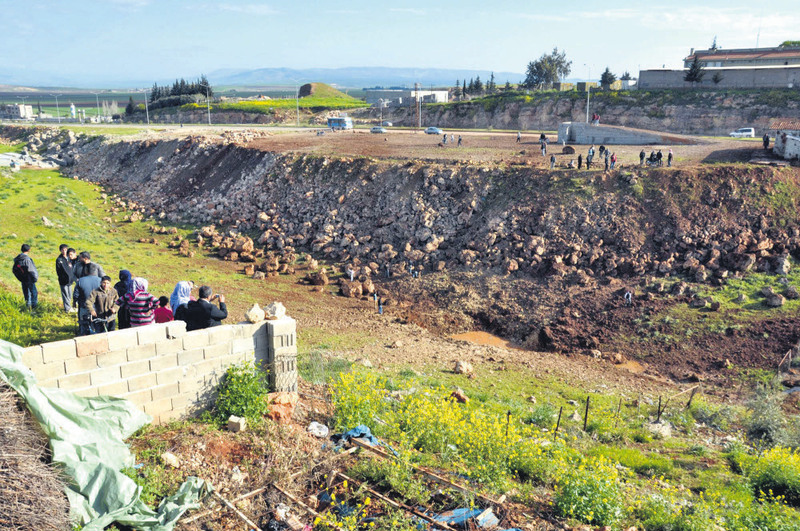 Another stray missile from Syria caused injuries in Reyhanlı, highlighting the heavy responsibility Turkey carries in caring for millions of Syrians while providing security within its borders

In the latest spillover of violence from neighboring Syria, five Turkish nationals were injured in the southern town of Reyhanlı when a rocket or missile fired by the Syrian army landed near a military outpost early yesterday. Already concerned about the ongoing civil war in its southern neighbor, Turkey was tense yesterday as a rocket or missile fired from the Syrian side landed on an empty lot in Reyhanlı, a town in the province of Hatay. Five locals were injured in the incident, as the rocket left a wide, 7-meter-deep crater in the area, tore down the roof and shattered the windows of a military building and damaged army vehicles nearby. All victims were reported to be civilians in the area. The site where the rocket landed was only 200 meters away from a military outpost overlooking the Syrian side.

It is not known whether it was a deliberate shot, but the Turkish army responded immediately by bombarding Syrian army artillery positions by two Howitzer cannons in the area.

A statement on the Turkish Armed Forces' website said the rocket or missile was fired by the Syrian army targeting rebels near the border and said the army responded "under the rules of engagement."

Turkey is among the most affected countries by the conflict in Syria that started four years ago. The country is struggling to pursue a humanitarian policy in the face of millions of displaced Syrians, while seeking to keep its border security tight, both against infiltration by militants either loyal to the Islamic State of Iraq and al-Sham (ISIS), or the Assad regime, which turned hostile towards Turkey after the Turkish government threw its support behind the rebels.

Authorities admit that keeping security watertight along the 915-kilometer-long border is difficult despite a massive military presence recently reinforced by additional troops. Several border crossings were closed earlier this month and more security measures such as fingerprint scanning are being installed at the border gates. Yet, this only prevents illegal crossings by smugglers or ISIS fighters while the border remains open to spillover of gunfire, rockets etc. Indeed, stray mortars and bullets fired from the Syrian side, either accidentally during clashes between sides or deliberately, occasionally hit the Turkish side. The Turkish military returns fire and hits Syrian targets after the incidences of spillover. The most recent spillover of importance before yesterday's was in September 2014. Three people were wounded when mortars landed on a house in the southeastern Turkish town of Suruç, located across from Kobani in Syria.

The deadliest spillover was in 2012. Five Turks were killed when shells from Syria's Tal Abyad hit a house in the town of Akçakale.

As the war rages on in Syria, Turkey has requested defense assistance from NATO and Patriot missile systems have been deployed in several cities near the border.

Reyhanlı, where the rocket landed, is the town where two bombings killed 53 people in 2013. The bombings are blamed on a group of militants loyal to the Assad regime.

Turkey is also concerned over a devious plot reported by the Turkish media quoting intelligence sources warning that Syrian convicts released from the regime's prisons may carry out attacks in Turkey after infiltrating the country under the guise of needy refugees.
Last Update: Mar 26, 2015 10:43 am
RELATED TOPICS