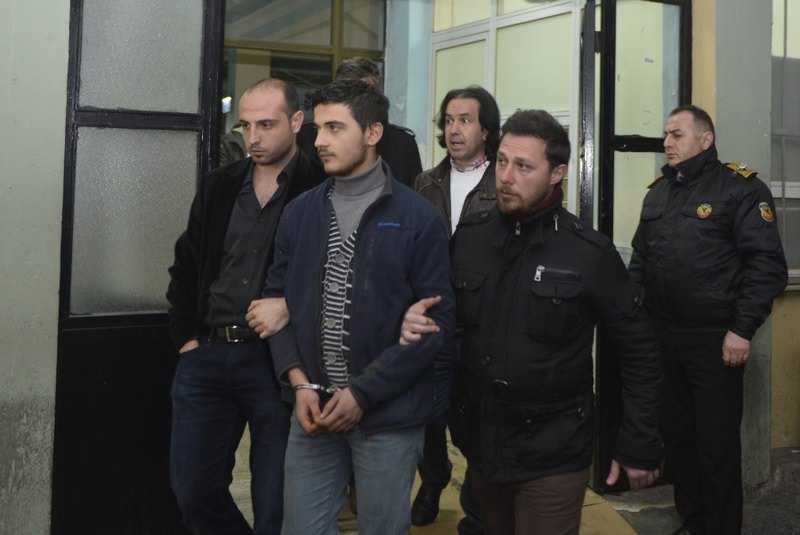 | AA Photo
by Mehmet Solmaz Apr 03, 2015 12:00 am
Turkish police detained Stephan Shak Kacynski, a British national of Polish origin, in operations against the terrorist organization DHKP-C in Istanbul on Thursday. He is accused of having close ties with the organization.

Among the suspects detained at the Turkish National Police's dawn raids at several locations in Istanbul on Thursday against the Revolutionary People's Liberation Party-Front (DHKP-C) was Stephan Shak Kacynski, a British national of Polish origin.

The 52-year-old freelance journalist is accused of having links to the terrorist organization that killed a prosecutor on Tuesday and attacked a police headquarters on Wednesday.

He was reportedly at the offices of İdil Culture Center associated with the group when he was detained by police.

Speaking to Daily Sabah, officials from the British Embassy in Ankara stated that they "closely working with Turkish partners to tackle DHKP-C." However, no comments were made on the claims that the detained British national is allegedly a spy working for British intelligence. "We condemn group's acts of terrorism in Istanbul this week. Condolences to the family of the prosecutor Mehmet Selim Kiraz. We are aware of the detained British national and we are offering consular assistance to him," the statement added.

Kacysnki, who occasionally writes articles on the terrorist organization on various websites, is a frequent traveler to Turkey. According to media outlets, he is a former member of the Communist Party of Great Britain, a Marxist-Leninist movement and he monitored the trial of an Austrian national accused of joining a DHKP-C rally for the Scottish Socialist Party. He was present as an observer on trials of DHKP-C members in the 1990s and early 2000s. Turkish media outlets, quoting intelligence sources, reported that Kacysnki was involved in the "activities" of the terrorist organization in Germany and Greece and often visited Istanbul and had contacts with various groups affiliated with the DHKP-C.

Turkish police had rounded up dozens of supporters of terrorist organizations in operations against the group in Istanbul and several other cities. Apart from Kacyznski, six senior figures of DHKP-C and members of a band known for its support of the terrorist organization, were detained in operations in Okmeydanı, a working-class neighborhood on Istanbul's European side. Okmeydanı is known as one of the strongholds of the DHKP-C and it is often the scene of violent riots by the organization's supporters. Along with suspects, police seized several weapons, ammunition and jammer devices. Turkish media reported that the raided places had tight security and police had to remove a set of 11 steel doors in one location to enter inside before the suspected militants burned or destroyed evidence that might link them to the organization.

The terrorist organization is known for having support from abroad, especially from far-left organizations in Europe. The support from abroad for the DHKP-C is not confined to individuals. Greece and Syria, two neighbors of Turkey, is known for harboring members of terrorist organizations. Greece houses Lavrion, a refugee camp where the militants, treated as asylum seekers, are trained by senior leaders of the organization. Syria, where the terrorist group was founded in 1994, is also known for openly harboring militants, especially at a time of strained relations between Turkey and its southern neighbor. According to reports in the Turkish media, the DHKP-C has a "base" in Syria's coastal city of Latakia and supported by al-Mukhaberat, formidable intelligence service of the al-Assad regime. An article in the Yeni Şafak newspaper quoting intelligence sources says 52 DHKP-C members are trained at the base and Turkish intelligence suspects they may carry out attacks in Turkey. The article also points out that Mihraç Ural, a Turkey-born militant who heads a splinter group of a movement that the DHKP-C fell out with, now coordinates training of DHKP-C members in Syria.
Last Update: Apr 03, 2015 7:25 pm
RELATED TOPICS