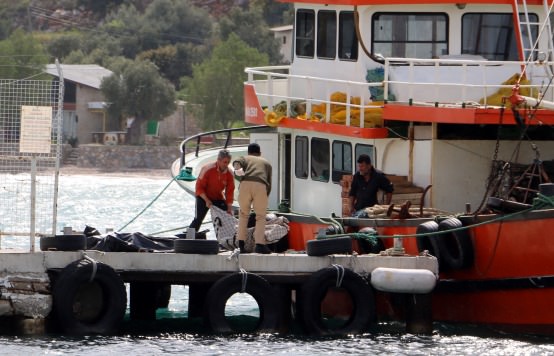 | AA Photo
by Daily Sabah with AA Apr 06, 2015 12:00 am
At least eight people have drowned after a boat carrying illegal migrants to the Greek islands sank in the Aegean Sea on Monday, Turkish officials said.

Amir Çiçek, governor of the Turkish southwestern province of Muğla, told The Anadolu Agency earlier in the day that six people had drowned and nine others were rescued.

The death toll increased to eight after two other bodies were found in the sea. Authorities said those who drowned were Iraqi and Syrian nationals.

The migrant boat was heading to Greece's Kos Island when it capsized off the Datca Gulf in Mugla, the governor added.

According to initial reports, there were around 20 people on board. Those who drowned lost their lives even though they were wearing life jackets.

The coast guard is continuing search and rescue operations with two helicopters, two ships and one boat, to find the remaining three people on board at the time of the incident.